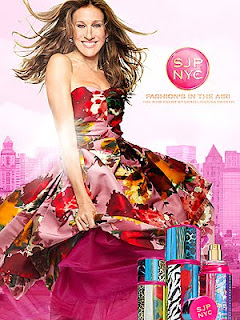 Sex and the City star Sarah Jessica Parker is planning to launch a fragrance inspired by the popular HBO show-turned-movie franchise.
SJP NYC will follow on the heels of the actress’ two successful fragrances, Lovely and Covet. Parker says that the fruity floral scent will be a “party in a bottle,” influenced primarily by her character, Carrie Bradshaw.
“A large part of the inspiration was what I now understand to be people’s impressions of seeing Carrie Bradshaw walk down the street, and what feelings that evokes for her and for them – a real sense of freedom and possibilities, a love for the city around her, and, of course, fashion,” she told WWD.
SJP NYC is set to be sold exclusively in Macy’s stores beginning in February, just in time to whet fans’ appetites for all things SATC all over again. The Sex and the City sequel then will open in movie theaters three months later.
Photo: People.com.
Update: On a related note, Miley Cyrus has shot her SATC part deux cameo.
Posted by Martin Haro at 5:35 AM

Email ThisBlogThis!Share to TwitterShare to FacebookShare to Pinterest
Labels: Eyes Wide Open, Sex and the City