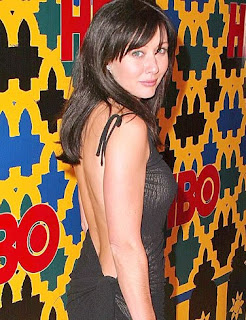 Shannen Doherty is re-inventing herself as a lady of comedy.
The actress is fed up with her bitch persona, so she’s putting the final touches on a reality-type show, reportedly to show her “lighter and funnier” side.
Ew – reality? She can do so much better than that.
Doherty will not only star in the project, tentatively titled Shannen (how inspired!), but she will also produce. She has apparently met with several networks.
Uh, call E!, dear.
Or better yet: Call your agent and tell them to get you on, I dunno, True Blood or something. I read the HBO hit show needs someone to play Debbie Pelt, the psycho ex-girlfriend of third-season player, the werewolf Alcide.
Photo: AskMen.com.
Posted by Martin Haro at 5:05 AM