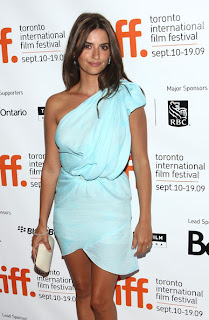 Oscar winner Penélope Cruz reportedly has shot a cameo in the Sex and the City sequel.
The Spanish actress didn’t have to stretch her acting muscle too much: she simply had to channel herself in a red carpet scene.
Cruz joins Miley Cyrus and Liza Minnelli on the SATC part deux cameo call sheet.
Btw, Minnelli is said to appear in the movie as a performer at Stanford (Willie Garson) and Anthony’s (Mario Cantone) wedding, singing Beyoncé’s “Single Ladies (Put a Ring on It),” no less.
Photo: Zimbio.com.
Posted by Martin Haro at 2:51 PM

Email ThisBlogThis!Share to TwitterShare to FacebookShare to Pinterest
Labels: Sex and the City