Once upon a time, there was a girl, a nothing-special type of girl, but this girl would grow up to become the first lady of fashion. 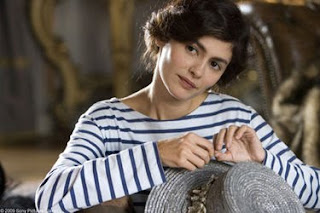 She was Gabrielle “Coco” Chanel, and Anne Fontaine’s Coco Before Chanel tells the story of her life – the story of the legend’s early days, actually.

Played by Audrey Tautou – who has never been as luminous in anything since her big splash in Amélie – Gabrielle is a headstrong French orphan who, through an extraordinary journey, becomes the legendary couturier who embodied the modern woman and became a timeless symbol of success, freedom, and style.

The en-français movie follows Gabrielle’s early formative days in Moulins as she struggled as a sewer by the day and cabaret singer by night (a bit of trivia: it was the song “Qui Qu’a Vu Coco Dans L’Trocadéro” that earned Chanel her trademark nickname, which she was reluctant to accept).

Fiercely independent, if a bit confused about who she was at this stage in her life, Gabrielle took to shacking up with Étienne Balsan (Benoît Poelvoorde), a protective horse breeder living outside Paris, while falling for Arthur “Boy” Capel (Junebug’s Alessandro Nivola), a British entrepreneur and the love of her life.

Coco Before Chanel explores this essential growth in the designer’s life, a transition that didn’t come easy to her as she had to learn how to compromise her distaste for convention with her desire for something more.

Tautou comes off kinda hoity-toity in the movie – she doesn’t…smile much – but it works, for Gabrielle was hardened by her experiences.
Ultimately, though, Coco Before Chanel, unlike its groundbreaking subject, didn’t quite come into its own until late in the game, when Chanel fully embraced her “Coco”ness. A shame, really, since it could’ve made for a more exciting movie.
My Rating **
Photo: Sony Pictures Classics.
Posted by Martin Haro at 9:39 PM