There are no ifs, ands, or buts about it, Michael Jackson’s THIS IS IT, the crown for most anticipated…uhh…film of the year is yours. 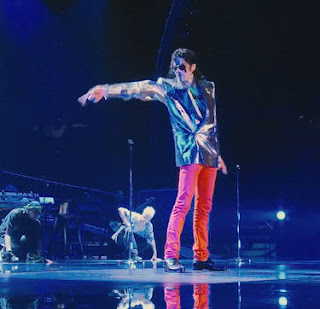 Yeah, I hesitate to call this epilogue in the life of the late King of Pop a documentary film because it really is nothing but a making-of documentary, y’ know, material that anyone would’ve expected to find as extras in the eventual DVD release of Jackson’s never-happened “This Is It Tour,” a series of concerts in London scheduled for last summer. So if you’re looking for that, then this will be right up your alley.

Here we are, though, and here we’ve been anticipating the opening around the world of this exclusive two-week engagement of Michael Jackson’s THIS IS IT, hoping that we’d be among the lucky ones to score tickets to this event.

And there you’ll be in the next few days, standing in line, buying popcorn, saving seats for friends, singing along with MJ, and choking up as you realize that, indeed, this is it.

After a lifetime of entertaining us, of shocking us, of disappointing us, MJ is gone. Buried, but certainly not forgotten.

Watching Michael Jackson’s THIS IS IT, though, I couldn’t help but wonder: Is that all there is?

“This film is Michael’s gift to his fans,” said Kenny Ortega (High School Musical), the tour’s director-turned-the doc’s director, in anticipation of its release.

Some may say it’s a risky way for a studio to make a buck, but I really think that this is actually more of a bittersweet farewell.

As Jackson rehearsed for his much-anticipated residency in London but a couple of months before opening night, Ortega and his crew were there with him. They “caught the magic” on camera, which is what you’ll see at the movie theater.

No one could’ve imagined that Jackson, who demands perfection in the nicest of ways, cracks jokes, and appears game and stronger than he’s been described since his death in the media, would be gone before the tour was set to star.

Michael Jackson’s THIS IS IT gives us a rare look at MJ’s genius in action. We hear him asking to let notes “simmer,” blessing everyone around him. We see belt his hits. And we see him dance. Boy, could he dance. (Alas – Spoiler Alert! – there’s no moonwalking.)

We see him getting ready to come back to us – come back alive, perhaps? – and while his dancers are shown doing the heavier lifting, MJ’s essence permeates throughout the stage and runs through their veins.

I’m not sure Michael Jackson’s THIS IS IT will satisfy more than a mere curiosity for what may have been. That concert Jackson was prepping was going to be groundbreaking…seminal…. Epic.

He was just so, after all, and this doc runs with that. There’s no mention of “the end.” This is a celebration of his final work, period. So that’s why and how you should see it. This is an event you do not want to miss, but leave your morbidity at home.

Michael Jackson was a King, but damn it, he was a man, too. A showman. And what a showman he was.

If you’re looking for answers, though, you will not find them in this bit of nostalgia. He wanted to be startin’ somethin’, and now you can see how, so enjoy that.

GREAT REVIEW. THE MOVIE IS AWESOME AND CERTAINLY LIVED UP TO EXPECTATIONS.