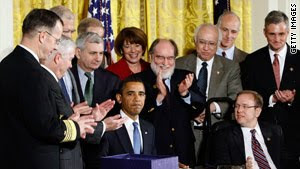 Today, President Barack Obama signed a law that makes it a federal crime to assault an individual because of his or her sexual orientation or gender identity.
Obama pledged to sign the Matthew Shepard & James Byrd Jr. Hate Crimes Prevention Act, which was added to a $680 billion defense authorization bill, after the Senate passed the legislation last week.
To loud applause, the POTUS hailed the hate crimes measure in the bill as a step toward change to “help protect our citizens from violence based on what they look like, who they love, how they pray. Today I’m pleased to say that we have proved that change is possible.”
Yes it is, and many people thank you. Now keep it going, you.
Photo: CNN.com.
Posted by Martin Haro at 5:02 PM