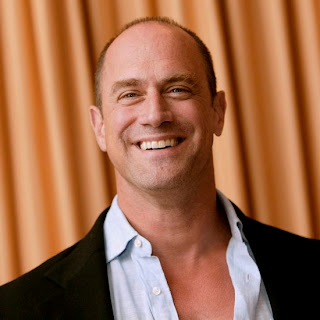 Christopher Meloni is eyeing a return to TV, but, sadly, not on network (sorry, NBC – I know how much you’d love to have him back on Law & Order: SVU) but on cable.
No, not cable: HBO, actually.
True Blood has come a-callin’, wanting him for a major role on the show’s fifth season that reportedly would see him play a very powerful vampire.
He. Must. Do it, right?
Photo: SuperiorPics.com.
Posted by Martin Haro at 11:00 AM No comments: 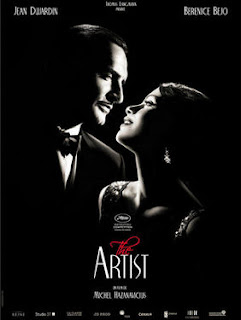 The Artist is the best picture of the year according to the New York Critics Circle.
Can this buzzy black-and-white silent film open in Miami, already?
Michel Hazanavicius, the film’s director took the prize for his work, too, so The Artist is officially in the Oscar race as a major player.
Meanwhile, Brad Pitt (The Tree of Life, Moneyball) and Meryl Streep (The Iron Lady) won the leading acting prizes, while Albert Brooks and the very busy Jessica Chastain were recognized for their supporting turns in Drive and The Tree of Life, The Help, and Take Shelter, respectively.
Click here to find more about who and what else New York honored.
Photo: The Weinstein Company.
Posted by Martin Haro at 10:41 AM No comments:

Email ThisBlogThis!Share to TwitterShare to FacebookShare to Pinterest
Labels: Awards 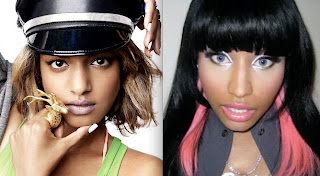 As we all (should) know, Madonna is hard at work on her new album.
Yeah, sons!
Now comes official word that the Queen of Pop has, indeed, recruited M.I.A. and Nicki Minaj to be featured on “Give Me All Your Love,” a.k.a. the song that is widely presumed to be the first single off her new project. You know, the one that leaked earlier this month.
Sooo gotta make it to the Super Bowl this winter....
Photo: HelloBeautiful.com.
Posted by Martin Haro at 2:37 PM No comments: 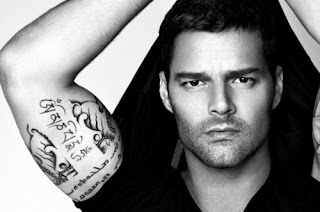 Ricky Martin is pulling a Gwyneth and heading...to McKinley High?
Well, he very well could be now that the powers that be at Glee have approached the multi-hyphenate to guest on the show in January as “the hottest Spanish teacher ever in the history of Ohio.”
Martin’s character, of course, would have musical tendencies and be part of not one but two numbers on the episode.
To this I say: Si, por favor!
Photo: RepeatingIslands.com.
Posted by Martin Haro at 1:52 PM No comments: 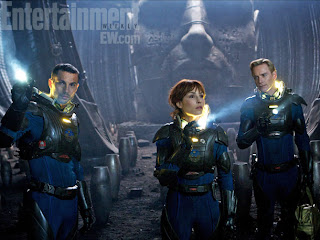 Next summer, Alien director Ridley Scott is taking us back to space in what is not a prequel to his 1979 thriller...or very well could be...on board Prometheus.

That’s the name of his next project and the spaceship that maroons Michael Fassbender, Noomi Rapace, and Logan Marshall-Green, among others (although I am not too sure about that, so don’t be hatin’) on a distant planet that may be, as Fassbender teases, inhabited “creatures that you’ll recognize.”

Co-star Charlize Theron would prefer it, however, if folks “let go of the idea that [Prometheus] is an Alien film.”

I guess we’ll find out for sure how this movie fits in the series, if at all, when it opens next summer. 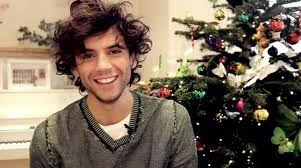 Mika has gone French again, just in time for the holidays.
The Brit has taken a liking for the language de l’amour, and now he’s recorded a French version of “Jingle Bells” for this Christmas album called Noël! Noël!! Noël!!!, and I think its the sexiest thing.
Click here to listen to the guy sing “Vive Le Vent.”
Nice, huh.
Photo: MikaFanClub.com.
Posted by Martin Haro at 7:00 AM No comments:

Look at You, Dar 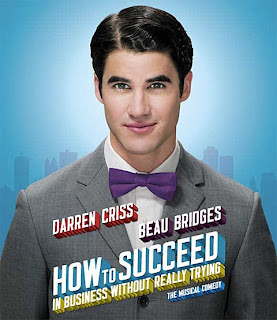 Get ready for Darren Criss, Broadway – the kid’s gonna take ya.
Check out the Glee standout’s first image as J. Pierrepont Find, the corporate ladder-climber at the center of How to Succeed in Business Without Really Trying.
He looks dapper. A little too Ken-like, but good.
Criss is set to take over the role from Daniel Radcliffe, for three weeks, on Jan. 3.
I wonder who will audiences prefer best, because you know here come the comparisons.
Photo: Towleroad.com.
Posted by Martin Haro at 2:55 PM No comments:

Email ThisBlogThis!Share to TwitterShare to FacebookShare to Pinterest
Labels: Broadway
Watch It, JC! 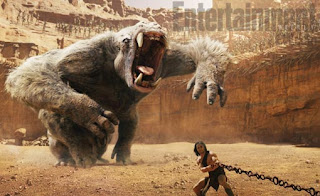 John Carter is one of next year’s movie I’m keenest to see for one reason: Taylor Kitsch.
Entertainment Weekly has an exclusive shot of the action and creatures, such as this great White Ape, the Friday Night Lights MVP will encounter on war-torn Mars, which is where the story takes Kitsch’s titular Civil War vet.
And, to provide the proverbial cherry for this deliciously brawny image, the magazine also has an exclusive Q&A with director Andrew Stanton (WALL-E) about the movie, so click here for that goodness.
Photo: EW.com.
Posted by Martin Haro at 10:12 AM No comments: 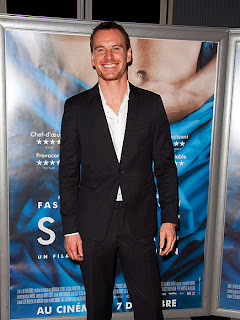 Oh, Michael Fassbender, how deeply I’ve fallen for ya.

You should smile more. I’d totally see to it. Trust.

And if you need someone to escort you to any potential Miami screenings of Shame, tweet me @moviemartin.

Photo: People.com.
Posted by Martin Haro at 9:15 AM No comments:

Email ThisBlogThis!Share to TwitterShare to FacebookShare to Pinterest
Labels: Just Because, Michael Fassbender
Not Jason Bourne 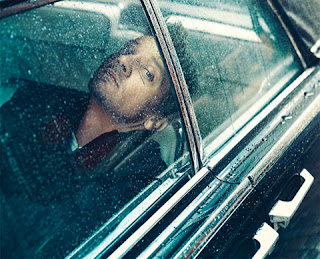 Jeremy Renner is ready for you not to call him Jason Bourne.
The Oscar nominee, who’s kinda sorta taken over the Bourne series from Matt Damon, has revealed a little about what fans can expect from the upcoming Tony Gilroy-directed Bourne Legacy, including the name of his character.
“[I’m playing] Aaron Cross,” he said, “but [I end] up having a bunch of different names. [The movie] has that same ticking clock, but it’s a new [thing with] new characters. It’s just a new set of agents with a different leash. The differences are pretty vast, but you’ll know it’s a Bourne movie.”
Mmm...even without Damon?
I’m skeptically curious, Jer, so I’ll be looking for this one to pay out.
Photo: Towleroad.com.
Posted by Martin Haro at 8:39 AM No comments: 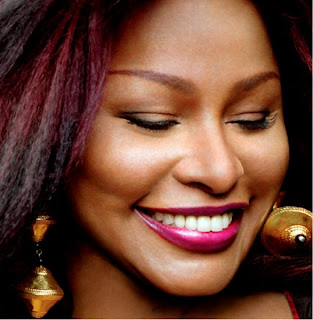 She is every woman, and you can’t have a Divas show without Chaka Khan.

The legendary singer is joining the likes of Mary J. Blige, Kelly Clarkson, and Florence Welch, among others, on VH-1’s upcoming special, which is set to pay tribute to influential musical cities like Chicago, London, and Memphis.

The latest, oh-so-soulful Divas show is set to air on Dec. 19, so set your digital recording device of choice.

In addition to Khan – Chaka Khan! – VH-1 also has enlisted Eryhak Badu, Estelle, and Marsha Ambrosius, as well as non-Divas like Boyz II Men and Travie McCoy, for the fun.

Photo: EURweb.com.
Posted by Martin Haro at 2:17 PM No comments: 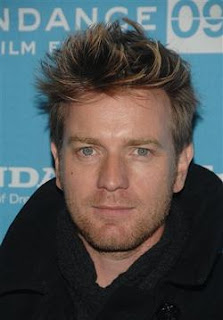 HBO is sure attracting the A-List these days.
First, they got Kate Winslet to headline Mildred Pierce.
Then, they scored Nicole Kidman and Clive Owen to star in the upcoming Hemingway & Gellhorn.
Now, they’ve lured Kidman’s Moulin Rouge! co-star Ewan McGregor to play Chip, the second son of Chris Cooper in Diane Wiest in their adaptation of Jonathan Franzen’s The Corrections.
I think that hardcover that’s been sitting on my table for years needs to get read ASAP.
Photo: Gawker.com.
Posted by Martin Haro at 10:26 AM No comments: I know the headline said Katy Perry will be hosting the Dec. 10 installment of Saturday Night Live, but the news...the news is Robyn will be the show’s musical guest!
Could I be more excited?
Well, my, yes, yes I could (if I had a cold chance in hell to be there).
What will the Swedish sensation perform? Something off her woefully underdiscovered Body Talk albums, I’m sure, but what?
She definitely should do “Dancing on My Own.” Maybe “Call Your Girlfriend”? Or should she go old-school and dust off “Show Me Love”?
Oh, I know: Let the show be a 90-minute Robyn concert!
Photo: HardCandyMusic.com.
Posted by Martin Haro at 6:55 PM No comments:

Email ThisBlogThis!Share to TwitterShare to FacebookShare to Pinterest
Labels: Eyes Wide Open, Robyn, TV
Not Something to Toast 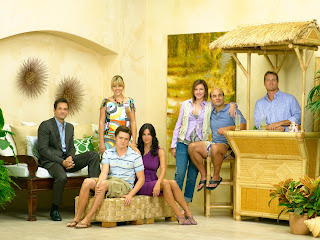 To borrow a bon mot from Satine, the cul-du-sac crew is being treated appallingly.
ABC has gone and done something foolish: It has reduced its Cougar Town episode order from 22 to 15 eps this season.
Yeah, on top of benching the show until late in midseason, the smart – not! – network peeps have gone and done that.
Urgh.
To add insult to TV-watching injury, there’s no word on when the show will come back yet.
The Larmy will not stand for this, ABC, so you better get it together.
Photo: Chron.com.
Posted by Martin Haro at 9:12 AM No comments: 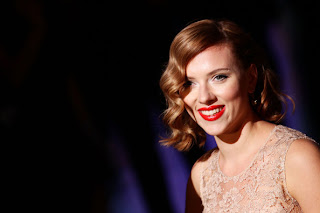 Just like Matt Damon, Scarlett Johansson is ready for not her close-up.
Damon’s We Bought a Zoo co-star is set to make her directorial debut with an adaptation of the lost Truman Capote novella Summer Crossing, which follows the story of a young woman who heads to post-World War II New York to discover a new life.
Interesting enough, this was Capote’s first work. He began writing in the early 1940s, but he claimed to have let it go and that he had destroyed it. The novella was discovered after his death and published in 2005.
As of now, Johansson only plans to helm the project, although I’m sure if she wants to the lead she could talk her way into it.
Photo: Zimbio.com.
Posted by Martin Haro at 9:04 AM No comments: 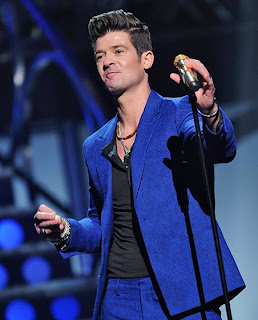 That Robin Thicke sure knows how to do dapper.
The singer so rocked a blue suit while performing at the Soul Train Awards on Thursday it should be illegal.
Btw, have you heard Thicke’s latest single, “Love After War”?
No?
Well, then...get!
Photo: UsMagazine.com.
Update: The Thickster has tweet-announced that his next album, Love After War, will drop on Dec. 6, just in time to make your holidays extra-sexy.
Loves it.
Posted by Martin Haro at 1:09 PM No comments: 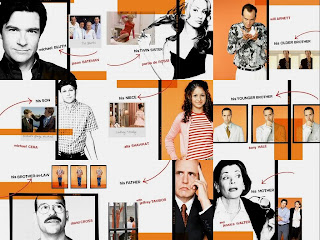 Arrested Development is getting revisited, officially, for good, no ifs, ands, or buts about it, in...two years.

Netflix has scored the privilege to air new episodes of the Emmy-winning cult classic starting in the first half of 2013.

No cast confirmations have been made, and no mention of the long-in-the-works movie was included in the more-welcome-than-a-frozen-banana announcement, but it would be a huge mistake not to make fans anything but happy at this point and not ensure that this next batch of eps is nothing but stellar.

Photo: Lifeadelica.com.
Posted by Martin Haro at 10:37 AM No comments:

Email ThisBlogThis!Share to TwitterShare to FacebookShare to Pinterest
Labels: Arrested Development, Eyes Wide Open, Netflix
Of the Ball She Was the Belle 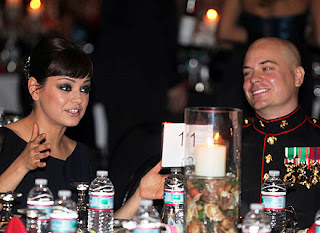 Just like Justin Timberlake and Kristin Cavallari, Mila Kunis made good on her promise and attended a Marine Corps ball in North Carolina on Friday.
The original get made a splash at the event in the arm of Sgt. Scott Moore, who took to YouTube last summer to get his date, sparking a frenzy of similar online asks.
Way to go, Mila. Way. To. Go!
Photo: People.com.
Posted by Martin Haro at 6:23 AM No comments: