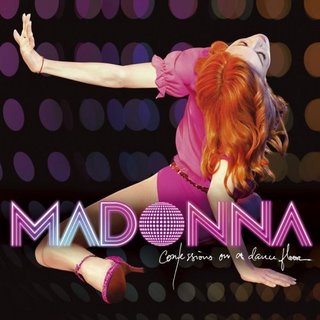 Oh, yeah! The Queen of Pop is about to release a new record called Confessions on a Dance Floor, which is supposed to be less "preachy" and more fun than her previous effort, American Life.

Now, I actually liked American Life, so I kind of don't see the point when people say that this is a comeback to her old self.

Certainly, for a while there, Madonna was writing and putting out music that was a little bit more personal and already quite confessional – and tremendously beautiful (listen to "Nothing Fails," "Intervention," and "X-Static Process," if you don't believe me) – but perhaps too serious-minded for those who like their Madonna a bit more light-hearted.

This is why I think it's a little bit funny that she should choose to call her new album Confessions on a Dance Floor, because at this point we all know how she felt growing up without her mother (check out "Mother and Father"), that she's no longer a Material Girl, that she has a family that she loves, and that a significant part of her life is devoted to the pursuit of spiritual enlightenment.

So what more could Madonna confess at this point?

That's what I'm obviously dying to find out, and come Nov. 15 we all will. If the preview that's playing on her website is a clue at all, then Madonna's most telling confession is going to be, indeed, an "unapologetic" desire to have fun.

Update: "Get Together," "Future Lovers," and "Jump" rock my world. This album is so much fun!
Posted by Martin Haro at 1:26 PM No comments:

How Come Arrested Development Is in Trouble? 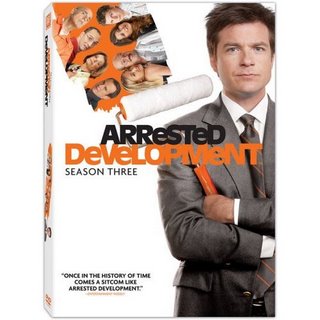 Arrested Development has got to be the funniest, most offbeat, most genius comedy on TV right now, and it is lagging in the ratings.

It follows the misadventures of the wacky Bluth family, who lost everything in an Enron-type scandal, and the one "normal" son, Michael (played by Jason Bateman), who has to keep them together.

The show co-stars Portia de Rossi, Will Arnett, the incomparable Tony Hale, David Cross, Jeffrey Tambor, and the invaluable Jessica Walter – and they are all tremendously talented and funny.

People are often complaining that sitcoms aren't funny anymore, or that networks are insulting viewers by putting crap out there.

Yet here's a great show that's being overlooked for whatever reason and would totally debunk any notion that the sitcom is dead (though Fall 2005's offerings have so far surpassed every expectation – I would like to think Arrested Development paved the way a little bit).

Update: Well...now that the show has been axed – good going, people! – you must, must, must rent Season 1 and Season 2 on DVD. Arrested Development is the funniest thing you have probably never seen.

Welcome To My Blog!

I resisted it much at first, but here I am...blogging. Now that I'm doing this, I'm going to have even less time to hang out with real people. Great.

I'm going to try to keep this as up to date as possible, always posting my latest reviews and random thoughts on pop culture and what, but if you don't hear from me, e-mail me at moviemartin@hotmail.com.

And thanks for checking this out...

Posted by Martin Haro at 7:17 AM No comments: