No Oscars for Hugh 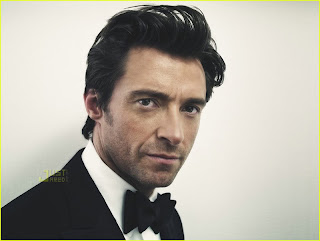 Well, it’s not like X-Men Origins: Wolverine was going to earn Hugh Jackman an Academy Award (we know), but the actor won’t be attending next year’s show – not as the evening’s host, at least.

Jackman has quietly pulled himself out of the running to host the 2010’s Oscars because he reportedly didn’t want to host the ceremony two years in a row.

I think it’s a smart move.

Dude’s special, and he should only make everything special. If Jackman thinks there can be such a thing as too much of him, then I won’t argue. I won’t like it, but I won’t argue.

Update: Another A-Lister who wont be, or doesn’t think he’ll be hosting the Oscars next year is next year’s Golden Globes host Ricky Gervais.

“If Oscars called, yes (I’d entertain the offer) but I don’t think they would,” the comedian told EW.com. “If they called me, I’d say, ‘I’ll turn up an hour before. I may be drunk, but just point me to where the microphone is.’ I don’t think they’ll accept those terms.”
Posted by Martin Haro at 3:40 PM

The charity 'Raising Malawi' (PR firm) founded by Madonna AND TWO OTHERS over three years ago held fund raisers for over two years before finally getting registered as a non-profit. In other words, Madonna and the others were free to squander the lion's share of that funding any way they saw fit for those first two years. She also pleaded with her fans worldwide for donations along the way. In the meantime, she toured the world to promote her latest CD and raked in another $280,000,000 gross in just over 12 months. To date, the basic financial info for 'Rasing Malawi' still hasn't been posted on the website or anywhere else. The 'progress' page only tells of the collective works by over 20 seperate charities. Each of which have their own sources of funding and may have recieved some sort of promotion or support from 'Raising Malawi' in order to be considered 'partners'. But no indication is made how much of their funding came from 'Raising Malawi' or how much of their progress if any could be directly attributed to 'Raising Malawi'. The fans/donors have no clue how many millions of dollars were raised in that first two years, no clue how much Madonna herself chipped in, and no clue how the money was spent before they finally registered as a non-profit. No clue what fraction of funding or works listed on that 'progress' page could be directly attributed to 'Raising Malawi'. Nothing to go on but the vague word of Madonna. The vague and very misleading word of Madonna. For example: She states in her latest promotional video that she will match any contributions made to her charity (PR firm) "dollar for dollar". However, there is a disclaimer posted on the website for 'Raising Malawi' that Madonna's total contribution will not exceed $100,000. Thats not per donation. Thats a maximum of $100,000 TOTAL. Less than a single days pay for Madonna. Also much less then she will surely rake in by promoting her own CDs, DVDs, and 'for profit' merchandise through this massive worldwide publicity stunt. So I called the office of 'Raising Malawi' in an attempt to verify some sort of efficient financial operation (310) 867-2881 or (888) 72-DONOR). These details are ALWAYS made available by legitimate charities to their potential donors. But not in this case. I got nothing but recorded messages and hangups. So I did some research on my own. 'Rasing Malawi' still hasn't been given any kind of rating by ANY independent charity watchdog like Charitywatch.org. The vast overwhelming majority of 'celebrity' foundations never are. In general, they are inneficient and riddled with corruption. Like the promotion of CDs, world tours, commercial websites, entire lines of jewelry (not just the single piece from which proceeds are donated), and high end fashion retail flagship stores. Celebrity foundations are also notorious for squandering much of their funding on private jet rides and super high end accomodations for their managers, PR crews, and celebrity figure heads. Its legal even for a nonprofit but not noble or efficient by any stretch of the imagination. In general, 'celebrity' foundations are a twisted inefficient mutant of charity, self-promotion, exotic travel, and PR crap. Still, they compete for funding with more efficient legitimate charities who do more work with less money. The celebrity figure heads often disregard the primary donors, co-founders, and managers, take personal credit for any collective work done, and seek maximum publicity shortly before or after the release of their own commercial projects. Its a sham. So if its not rated, then don't support it. Instead, support a top rated charity like any of those given high ratings at Charitywatch.org.