Working on the Sparkle 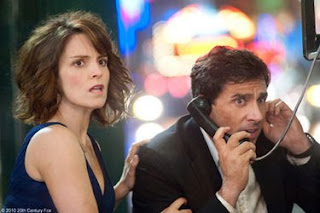 Of course, the NBC stars (he of The Office, she of 30 Rock) are married to other people in real life, but that didn’t preclude them from coupling up on the big screen for the slightly unevent but totally cute and amiable comedy Date Night.
The funny two play Phil and Claire Foster, a sensible, loving couple from suburban New Jersey. They are Mr. and Mrs. Everyman, and they seem to have it all: good jobs with their struggles (check!), nice house (double-check!), two rambunctious kids (got those, too) – the American Dream works.
But they don’t have romance. Not that much, anyway.
The Fosters try to maintain a sort of routine-breaking weekly date night, though, a by-the-numbers exercise in keeping the fire alive involving the same weekly night out at the same local restaurant.
It’s hardly exciting, but they make it work, y’ know.
The couple is exhausted, though, so one day, after Claire decides to dress up in a beautiful blue dress (that Fey wears exquisitely, btw), Phil surprises her (only after remembering it’s grown-ups night out) and together they venture into Manhattan to dine in the city’s hottest new restaurant (without a reservation, the silly rabbits).
Hoping to be seated sometime before the clock strikes midnight and they turn into responsible adults again, they take a no-show couple’s reservations...and then their evening really gets goin’. The Fosters become the Tripplehorns, and they soon discover that their alter egos aren’t necessarily upstanding citizens – they’re a couple of petty thieves who are being hunted down by a pair of corrupt cops for having stolen property from some very dangerous people.
Before they can go all “Uh oh,” Phil and Claire are forced on the run, realizing along the way that their out-of-the-ordinary date night just got extra-extraordinary as they embark on a wild and dangerous series of crazy adventures to save their lives.
Well, they got what they wanted: fun.
And you know what, so will you if you watch this one.
Yeah, it’s not an LOL-type of movie – and you may not laugh at every joke or funny stich. But it’s quite entertaining (spotting the cameos along should keep you busy, not to mention staring at Mark Wahlberg’s chest, which should’ve gotten a credit of its own).
Carell and Fey, especially, are terrific: they combine harriedness (their morning ritual, their unspicy sex life, for instance) with hilarity (the Fosters put on the most awkward pole dance ever at one point) to great effect...and they remain committed to making us laugh, like when they share the longest kiss I’ve seen on screen.
My Rating ***
Photo: 20th Century Fox.
Posted by Martin Haro at 4:49 PM