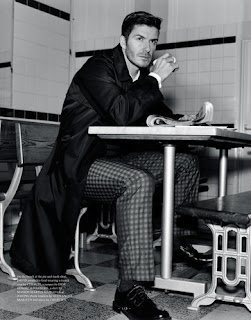 One can never have enough David Beckham, so I’m super-happy that the British footballer has stepped in front of a camera once again, this time for the journal Fantastic Man, which features him as the most demure I’ve seen him in…well, ever.
It’s a nice change of pace from the usual peddling of underwear – but not som’in’ I advocate he make a habit of, you know.
Among the things the East Londoner reveals is the one thing his misses most from his homeland.
“Being an East End boy, I do miss my pie and mash,” he said. “I’ve been living out of England for the last eight or nine years. Whenever I can get down there, I get down there.”
Well, ain’t that nice….
Photo: TMagazine.blogs.NYTimes.
Posted by Martin Haro at 4:04 AM