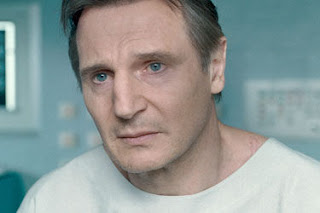 And even though I recognized the sum of all of the parts of Unknown (directed by Orphan helmer Jaume Collet-Serra, the movie’s made of a dash of Bourne Identity, borrows from Hitchcock, and tips its Euro-style hat to the Cold War intrigue of a silver screen era long gone), I kinda liked it, too.
Neeson stars in the thriller as Dr. Martin Harris, a man who awakens from a four-day coma in a Berlin hospital, only to discover that another man (Aidan Quinn) has taken on his identity and that no one, (not even his ice princess-wife, Elizabeth, played by Mad Men’s January Jones), believes him to be who he claims to be.
With the help of Gina, (Diane Kruger), the young illegal immigrant-cab driver who saved his life after their taxi plummeted into a very cold river, maybe-Dr. Harris sets out to prove who he is and find out WTF is going on.
The question at the center of Unknown is, of course, who this man is, as well as why would anyone want to steal his identity.
What does he know that is of so much value to the folks erasing his life and chasing after him?
That you’ll have to watch to find, if you haven’t already, but know that it’ll take a little bit to get to the answers to this and the other questions that may arise along the way. Just know that the payout, while a doozy, is not as predictable as you would think...but then again it will make you go, “But of course!” Which doesn’t make Unknown any less enjoyable, especially in its third act as everything is revealed and Neeson gets to flex his finely aged muscles.
My Rating ***
Photo: Warner Bros.
Posted by Martin Haro at 8:53 PM