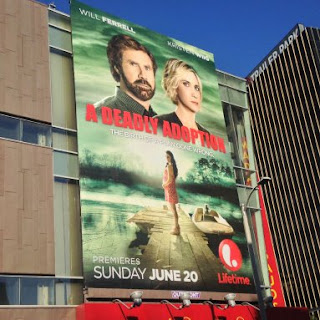 Of course it’s back on!

That mysterious made-for-Lifetime parody movie that Will Ferrell and Kristen Wiig had been working on but then decided to 86 a couple of months ago, when it got leaked that they were working on it, is going to air, after all.

A Deadly Adoption will premiere on June 20, and center on a husband and wife who kidnap a young woman (Jessica Lowndes, from The CW’s 90210) in the final months of her pregnancy just so they can adopt her baby.

Needles to say, as it would in such a “high-stakes dramatic thriller,” things go awry for the couple.

Which brings on the funny for us, as does this: The movie’s debut will come at the same time Lifetime’s notorious movie franchise will be celebrating its 25th anniversary.

Mother, may I watch this?

Photo: HollywoodReporter.com.
Posted by Martin Haro at 9:13 AM