Dope Is the Word 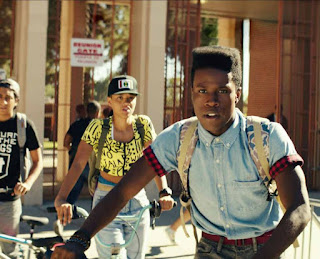 It’s the third must-see indie of the summer season.

This one’s opening this Friday, people, so get. I mean, it’s busy out there, and Me and Earl and the Dying Girl is already out, vying for your attention.

And before you know it The Diary of a Teenage Girl’s coming in August.

And you know it all will take a backseat to the bad boys of Magic Mike XXL as soon as the first rippling set o’ abs is flashed on July 1....

Dope, btw, centers on Malcolm, a geek (Shameik Moore) trying to make it through life in a tough neighborhood and how his life changes after he gets a chance invite to an underground party, which leads him and his friends into a great L.A. adventure.