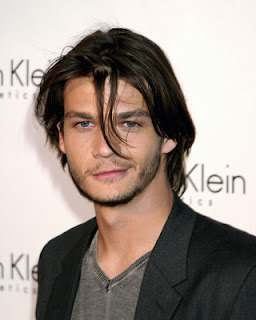 It’s been like, a hot sec there since I last saw Trent Ford doing anything major.
OK, so he played a bit of a pivotal part in the introduction of Klaus on TV’s The Vampire Diaries, but that’s about it.
That could be changing in the fall now that the cutie-patootie has nabbed a part on the new J.J. Abrams-produced CW show Shelter.
Ford’s set to play a rock star staying at the New England-based inn in and around which the drama is set.
Mmm...I wonder how much shirtlessness he’ll do.
Photo: StarPulse.com.
Posted by Martin Haro at 9:53 AM No comments:

Guess Who Still Has It 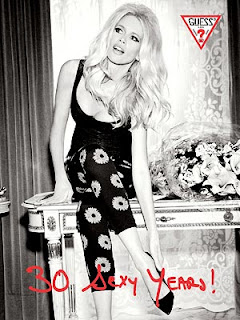 Thirty years ago, Guess was born.
Seven years into its history, the once-beyond-It jeans company hired a beautiful German girl by the name of Claudia Schiffer to be its Guess Girl from 1989 to 1991.
Now, 23 years later, La Schiffer’s back in Guess, and she’s still looking smokin’.
Paul Marciano, the company’s CEO and creative director, recognizes that Guess and Schiffer marked turning points for each other, so he made the latest shoot a family affair, recruiting original-campaign photographer Ellen Von Unwerth to capture the model once again.
Ain’t that nice.
The new collection, which Schiffer and other Guess Girls helped inspired, will arrive in Guess stores and Bloomingdale’s on April 19.
Here’s to hoping this is just the beginning of a slew of new campaigns for one of the original supermodels: I enjoy her.
Photo: People.com.
Posted by Martin Haro at 2:45 PM No comments:

Email ThisBlogThis!Share to TwitterShare to FacebookShare to Pinterest
Labels: Fashion
A Rebel at Bay 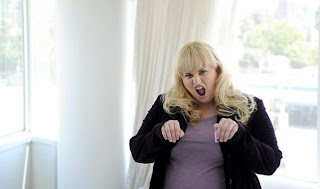 Rebel Wilson is so It right now.

The Bridesmaids eye-catcher-turned-TV star of tomorrow (she’s headlining a potential, Conan O’Brien-produced comedy for fall titled Super Fun Night) has landed a role in Michael Bay’s Pain and Gain, a low-budget (for Bay) based-on-a-true-crime drama about bodybuilders who get involved in a kidnapping and extortion plot that goes awry.

The movie – which is set to start shooting in Miami like, now – co-stars Mark Wahlberg (who already was spotted in town, having dinner with friends at Nobu), Dwayne Johnson, Ed Harris, and Anthony Mackie (The Adjustment Bureau).

Photo: Pedestrian.tv.
Posted by Martin Haro at 2:30 PM No comments: 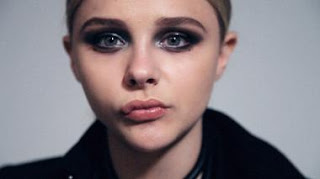 Carrie Bradshaw isn’t the only one getting a new face: Stephen King’s young and tormented telekinetic of the same first name is also getting a redux of her own.
Chloë Grace Moretz has been tapped to play the title role in the latest adaptation of Carrie that director Kimberly Pierce (Boys Don’t Cry) is prepping.
Lindsay Lohan had at one point been rumored to be in contention for the part, but that was like, two probations ago...and that’s neither here nor there.
What matters is now the pressure is on for Moretz, who pretty much stole the show in Kick-Ass.
Still, though – those are some big, Sissy Spacek-sized shoes she has to fill now. if someone can rise to the challenge, it is definitely this girl. She’s got the chops.
Photo: InterviewMagazine.com.
Posted by Martin Haro at 5:16 AM No comments:

Gwyneth Paltrow could be getting ready for a different kind of close-up than she’s used to.

The Oscar winner reportedly is set to play Pablo Picasso’s muse and lover, Dora Maar, in a new movie called 33 Días. The title of the project refers to how long it took the master to create his famous “Guernica” painting, which Maar, a French photographer, chronicled.

Antonio Banderas, who is poised to portray the Spanish master, supposedly really wants G.P. to be in the movie with him, so we’ll see if she shows up on set late this summer when the movie goes into production in Europe.

I think it’d be too cool if Paltrow did the movie in Spanish. After all, she has a handle on the language. Dale, dale!

Photo: BellaSugar.com.au.
Posted by Martin Haro at 7:41 AM No comments: 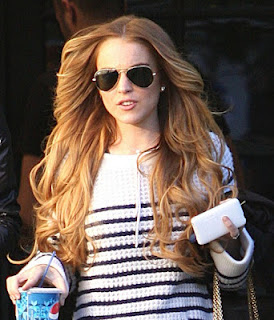 Ooh, childs – Lindsay Lohan is totally into this comeback of hers...so be darned, alleged driving incidents.
Evidently, the remember-she-was-an-actress is in serious talks to play herself on the Nationals episode of TV’s Glee.
Guess all is forgiven – the powers that be notoriously had Gwyneth Paltrow’s Holly Holliday slam L2 on an ep last seaon – and La Lohan is moving forward with her life.
Good next move, girl.
And best of luck to ya on seeing that Elizabeth Taylor Lifetime biopic happen!
Photo: OnlineTV-blog.blogspot.com.
Update 1: Consider this done: Linds has been cast. (Yay.)
Update 2: Whoopi Goldberg also is set to guest on the show, as the New York professor evaluating Rachel (Lea Michele) and Kurt (Chris Colfer) as they audition for NYADA.
Posted by Martin Haro at 6:46 PM No comments: 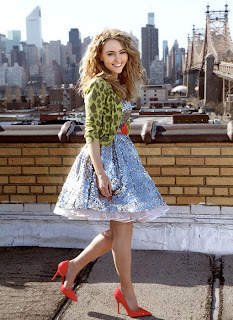 Sarah Jessica Parker, this is what the TV powers that be think a younger Carrie Bradshaw woulda looked like.
Check out AnnaSophia Robb in character as the future show gal of Sex and the City on The CW’s The Carrie Diaries.
The fall hopeful will explore Carrie’s life during her high school years back in the ’80s, as well as her early friendships and crush on a moneyed young guy named Sebastian Kydd.
Photo: EW.com.
Posted by Martin Haro at 9:03 AM No comments:

Tonight was the night: As rumored all weekend – and for a change – Madonna turned up at a Miami event, just randomly like that.
The Magic City was abuzz with the pesky rumor that spreads around town like fire every time there there’s something major going on (be it a fashion week of any sort, festival, or like, a shoot/concert/opening of an anything by anyone remotely connected to her), so, obviously, my antenna was perked...with skepticism.
Friday night, for instance, M was “supposed” to show up at the Delano Hotel for the official MDNA part at which DJ Tracy Young was spinning.
Nada. (Duh, she had her Jewish obligations to tend to first, suckers).
Saturday night was different, though.
Avicii was to bring her out on stage at the Ultra Music Festival for a special little something.
The rumor got stronger and stronger as the night grew dark. When Madonna.com put out a news alert, letting fans know they should check out UMFTV, I accepted there was some truth to the rumor, and that I just would not be there (I do not enjoy the big crowds like that ones that make Ultra what it is...and at the Fontainebleau Miami Beach watching Tony Bennett perform with Queen Latifah at the Blacks’ Gala.
And then, there was the Queen of Pop. Not brought out middle of Avicii’s performance but at the top of it, to bring him out and dance to her his remix of “Girl Gone Wild.”
“Hello everybody,” she said “I finally made it to the Ultra Music Festival!”
Just another reason why M is the coolest woman in the world. And why a rumor, especially one about her regalness in Miami, can surprise and be more than just wishful thinking aloud and overreaching PRing.
Posted by Martin Haro at 11:17 PM No comments: 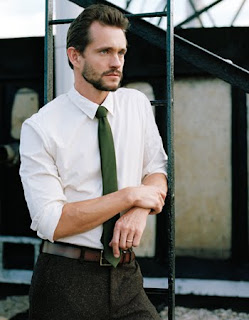 Awesome news, fans of Hugh Dancy: The guy is coming to TV.

Claire Danes’ cutie-patootie of a husband has nabbed the part of young FBI profiler Will Graham on NBC’s upcoming Hannibal Lecter drama.

Bryan Fuller, the same guy who gave us Pushing Daisies a few seasons ago, is writing and producing the based-on-Red Dragon show for the Peacock, which has yet to cast the role of the cannibalistic doctor.

NBC already has ordered 13 eps for the fall, which means both Dancy and Danes will on the tube next season (she is the star of the widely addictive Homeland on Showtime, which I just started watching).

Photo: Out.com.
Posted by Martin Haro at 3:13 PM No comments: 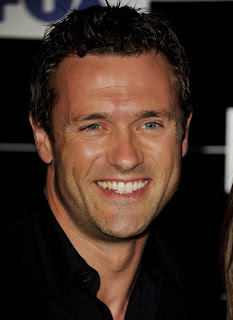 Jason O’Mara is back on this timeline.
The erstwhile lead on TV’s Terra Nova (R.I.P., dino-show) will keep things period, though, now that he has joined the untitled CBS drama pilot based on the life of rodeo cowboy-cum-Vegas sheriff Ralph Lamb.
O’Mara will co-star as Lamb’s diplomatic younger brother and opposite Dennis Quaid and Michael Chiklis.
The actor remains attached to Terra Nova, however. Fox may have 86d the show, but Netflix is keen to see it continue.
I guess we will see how this shakes when it shakes.
Photo: Zimbio.com.
Posted by Martin Haro at 9:00 AM No comments: 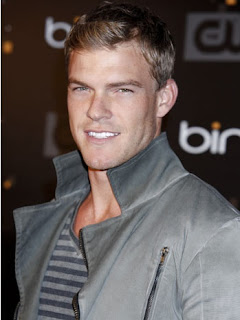 One of the studliest studs ever to grace The CW is going big network.
Alan Richtson, a.k.a. Smallville’s Aquaman, has joined the cast of Super Fun Night, the comedy pilot starring Rebel Wilson from Bridesmaids.
The actor’s set to play the hunky bf of Wilson’s younger-and-skinnier sister-character.
Photo: HollywoodReporter.com.
Posted by Martin Haro at 4:24 AM No comments: 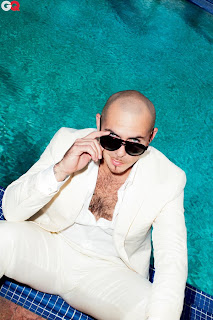 Mr. Worldwide himself, Pitbull, is headed out of this world.
Musically, at least.
The singer has been tapped to provide the theme song for the upcoming Men in Black 3, so he’s written and recorded a little ditty titled “Back in Time,” which fits with movie’s plot, which, memory serves, sees Will Smith traveling, well...back in time, and meeting Tommy Lee Jones’ younger self, played by Josh Brolin.
And here’s the kicker, soundtrack-music fans: The single will be available for download on March 26.
Men in Black 3, meanwhile, will arrive in theaters on May 25.
Posted by Martin Haro at 1:35 PM No comments: