And Then Art Kinda Imitates Life.... 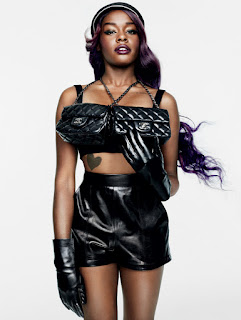 So Azealia Banks may not have ruled the charts with her Broke with Expensive Taste album quite the way that she should have, and she may have gone and posed for Playboy this year....

So what, who cares. Girlfriend is going to get noticed one way or another, which is why she now has her eye on Hollywood.

Banks is going to star as Coco in a new movie titled Coco – so it will be all about her! – that the RZA is getting ready to direct. The Brooklyn-set drama will center will center on an aspiring twentysomething rapper who wants a career in hip-hop but is at that crossroads lots of people arrive at (you know, the one about parents wanting ya to finish college and s---). In trying to be a good girl, she enrolls in school, where she discover her true calling as a spoken-word artist.

Common, Jill Scott, and Lorraine Toussaint (Netflix’s Orange Is the New Black) are set to co-star.