I’d been craving for Julie & Julia for a while when I saw it a few of weeks ago, so now that I’ve seen the movie I can tell you I absolutely want seconds. 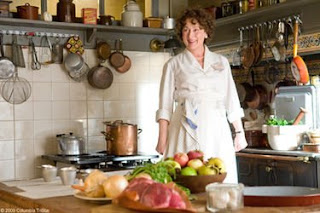 I so loved the movie I wouldn’t mind it if it snagged one of the 10 Oscar noms that will be in place next awards season. It’s that good and enjoyable.

Nora Ephron directs – from her own screenplay adapted from two books, My Life in France, Julia Child’s autobiography written with Alex Prud'homme, and a memoir by blogger-turned-author Julie Powell – Amy Adams and Meryl Streep, Doubt co-stars reuniting for a most delightful late-summer movie.

As if I had to say it, Adam plays Powell, a woman living in Queens, N.Y., in 2002, while Streep takes on Child, willing herself as only she could to grow eight inches to play the 6’2” super-chef.

The two never share any screen time (Child’s story unfolds in the early 1950s), but each actress makes do by delivering fully realized performances that are delicious on their own – it’s a bit like getting two flicks for the price of one! – and mix to make Julie & Julia a success.

Adams’ Julie is a frustrated temp secretary in post-Sept. 11 New York who, feeling unaccomplished on the eve of her 30th birthday (most of her girl friends are sharp-suited career women of power), embarks on an ambitious year-long culinary quest to cook each and every single one of the 524 recipes found in Julia Child’s Mastering the Art of French Cooking.

Child, of course, is played with mouthwatering aplomb by Streep.

Now, I never saw the chef’s show, but I’m told The Actress did a terrific job capturing every intonation and every mannerism – as she would. And I s’ppose I could say that from this performance I have a good idea for the joy with which Child approach every aspect of her life. So job well done, and Meryl. See you at next year’s Oscars.

But I digress, and that’s because I’m already picturing myself watching the movie this opening weekend for the second time.

Julie & Julia lovingly intertwines the lives of two women who, though separated by time and space, are both at a loss until they discover that with the right combo of passion, fearlessness, support from their hubbies (Chris Messina for Adams, and the invaluable Stanley Tucci for Streep), and, yes, lots and lots of butter, anything is possible.

Since I saw the movie and as opening day approached, I’ve been reading that some reviews have been critical of the way Julie and Julia – but Julie especially – are portrayed in the movie, that as one of the original bloggers she’s a narcissist, to which I say hello! and hogwash.

Julie and Julia are really, truly real women. All each wants is to have her work mean something. They make few apologies for it, and that to me says they get it. They see the bigger picture, and they’re big enough to realize when they’ve done something they shouldn’t.

They learn from, buck up, have a sweet something, and keep going.

And they do so with great courage, great passion, and best of all, great food.

I can and do appreciate that quite a bit.