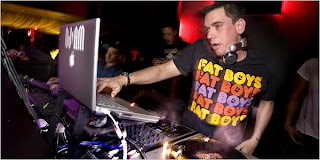 Adam Goldstein, a.k.a. DJ AM, was found dead in his New York City apartment today.
The cause of death has not been released by the medical examiner, although an NYPD source said there was no apparent evidence of foul play.
However, drug paraphernalia has been reported to have been found in Goldstein’s apartment. The DJ had battled addiction in the past, and in 2008, he narrowly escaped death a jet crash with Blink 182’s Travis Barker. He is said to have been struggling with the emotional and physical aftermath of the incident.
Goldstein was 36 years old.
Photo: NYTimes.com.
Update 1: Click here to read reaction from celebs such as Lindsay Lohan, Katy Perry, Diddy, DJ Samantha Ronson, Ashton Kutcher, Ryan Seacrest, and Perez Hilton, among others.
Update 2: Now click here to read what Mandy Moore had to say about the news. Moore and Goldstein dated back in 2007 and had remained close friends.
Posted by Martin Haro at 5:53 PM

Really shocking, but at the same time not that much. For every Robert Downey there's another celeb who doesn't conquer his demons.
RIP AM.