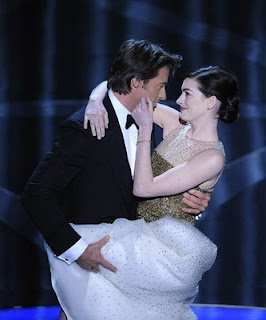 Everybody’s future ex, Hugh Jackman, is attached to play P.T. Barnum in the contemporary musical The Greatest Showman on Earth, being written by Sex and the City writer Jenny Bicks, with whom he worked on the 81st Academy Awards earlier this year.
The movie will tell the story of the three-ring circus master’s life and his obsession with singer Jenny Lind, the “Swedish Nightingale.”
Lind is being written for Anne Hathaway, who oh-so-memorably teamed with Jackman for his opening number at the Oscars (look at them go it at right).
And how’s this for the cherry on top of this news? 20th Century Fox is in talks with Mika – can I get a woo-hoo?! – to take on the music and lyrics.
Photo: WoodenSpears.com.
Posted by Martin Haro at 6:29 AM

Awesome news. And awesome for Mika!