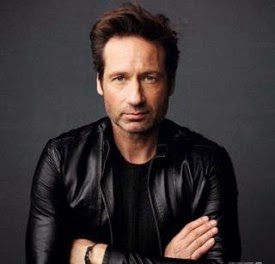 Make room in the NBC cafeteria, Gillian Anderson – David Duchovny is playing with the Peacock, too.

Yes! The almost-former star of Showtime’s Californication is bound to bump into his former X-Files co-star (and current Crisis player) now he’s set to star in Aquarius, a late-1960s-set “event” drama, as an L.A. police sergeant who’s after a young Charles Manson.

“The twists and turns of a complicated undercover operation,” said NBC in its release about the show, “will lead Duchovny’s character and his young partner to the brink of Manson’s crimes that will eventually lead to the Tate-LaBianca murders in subsequent seasons.”

Aquarius has been given an initial 13-episode run.

I guess network TV has finally caught up to the fact that it’s a new dawn.

Photo: Deadline.com.
Posted by Martin Haro at 10:05 AM