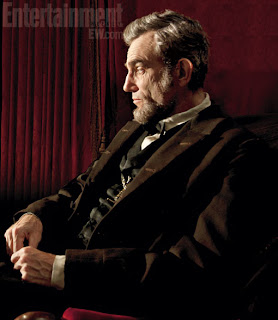 Wowza, Daniel Day-Lewis is quite the ringer for Abraham Lincoln.

I mean, the actor’s resemblance to the 16th American president is uncanny, isn’t it?
We’ll actually have to wait until Nov. 9 to see the man in action in Steven Spielberg’s Lincoln (which will focus on the last four months of the guys life), but, dayum, consider me properly impressed.
The director says that in the hands of his beyond-capable Oscar-winning lead, the authenticity of the character will be felt skin deep, for the actor is sure to capture the president’s “very complicated, very clear inner life.”
Well, he would know.
Photo: EW.com.
Posted by Martin Haro at 3:03 AM