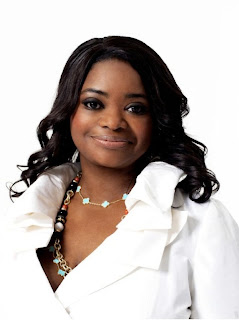 Yay! Oscar winner Octavia Spencer’s gonna be in a bunch of movies.

The Help actress will co-star opposite Paula Patton in Baggage Claim, a comedy about a flight attendant (P2) who is the oldest unmarried woman in her family and sets to bagging herself a groom before her sister gets married in a month.

Derek Luke is also on board, I presume, as the (sexy) man on which the spinster sets her sights
Spencer also will be appearing in Diablo Cody’s untitled directorial debut, a movie called Snowpiercer with Chris Evans, and the Forest Whitaker-produced Fruitvale.
Photo: TastemakerMag.com.
Posted by Martin Haro at 7:35 PM