A Man in Distance and Time

Jake Gyllenhaal gets blown up quite a bit in Source Code. 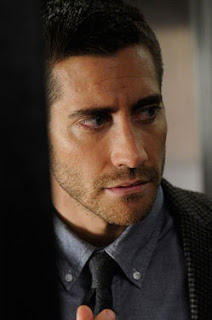 Gyllen-yum plays two men...well, no...more like...uhh...a man with two ident...no, wait. He plays a man taking on another’s identity in an alternate universe in this mind-boggling thriller directed by Duncan Jones, the helmer of the well-liked 2009 offering Moon.
I’m making my head hurt thinking about this all over again – in the best way.
Alright, here I go again.
Jakey-bear plays Colter Stevens, a decorated chopper pilot who wakes up in the body of another man, a Chicago-area teacher named Sean Fentress. Sean is a passenger on a commuter train. He’s sitting across from Christina, a beautiful woman named played by Michelle Mongahan. They seem to know each other. But Sean, or make that Capt. Stevens, is rather confused and for the next few moments he tries to make sense of what is going on.
Then, the train blows up.
Capt. Stevens wakes up elsewhere, though. He’s in some sort of capsule, surrounded by monitors. Someone’s talking to him, prompting him to remember what he saw. That someone is Goodwin, a field officer of some sort played by Vera Farmiga. She wants to know if he found the bomber...if he knows who’s behind this attack because another attack is imminent and he is the only one who can prevent it.
The good ol’ captain is part of a super-sophisticated and experimental mission that enables him to plug into the last eight minutes of a person’s life using this cutting-edge “Source Code,” right, a program invented by a Dr. Rutledge (Jeffrey Wright). Capt. Stevens doesn’t seem to recall signing up for this assignment, but he’s got his marching orders, and he will see it through, if anything because he’s taking a liking to Christina...even if it means going back time after time. He has grows fond of this woman and he wants to save her as much, if not more than he wants to be a good soldier.
With the clock ticking – and, as it would happen – the powers that be explain that the real reality cannot be altered...that Christina is dead, that Sean is dead, that Capt. Stevens has a mandate, a very specific thing to do.
Throughout the course of the movie we find out what’s in store for him (of, if you’re smart like me, you’ll figure some of it out halfway through – and remain at the edge of your seat, anyway). The science of it all may leave you scratching your head, but the joy of looking for clues, not to mention the sheer excitement of seeing Gyllenhaal (try to) save the day, should keep you engrossed by the whole ingenious thing and completely satisfied.
My Rating ***
Photo: Summit Entertainment.
Posted by Martin Haro at 8:13 PM