Girl with the Killer Instinct

Saoirse Ronan, the Academy Award-nominated actress who so dazzled audiences and critics with her breakthrough turn in Atonement, has reunited with her director from that film, Joe Wright, for the action thriller Hanna, a very fairy-tale-esque story about a girl who comes of age while facing some pretty fearsome foes. 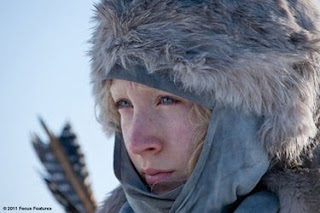 Hanna is a lovely teenaged girl raised by her father (Eric Bana) in the wild forests of Finland.
She’s a special one, that Hanna – she can fend for herself quickly and strongly and ably...she’s fast, strong, and good with a bow and arrow...she speaks several languages.
And she can kill anyone who crosses her path without giving them a second thought.
Her father, you see, is an ex-CIA agent named Erik Heller who has been in hiding for years, training his daughter for one very special mission: to find and kill Marissa Wiegler (Cate Blanchett), an icy bitch of a former colleague who played a pivotal part in the Hellers’ past.
They lead a secretive, isolated life just below the Arctic Circle. And, as he naturally would, Erik may be keeping some secrets, too – secrets about Hanna’s origin. Before he cuts her loose, we know he is trying to protect her (we don’t find out why, exactly until much, much later, natch), and that sending her into the wild, wild world is and always has been part of the plan.
So we with the literal push of a button, Hanna kicks into a faster, more pulsating gear (scored by The Chemical Brothers), with Erik feeling “the peoples” that are coming to get them, and Hanna being brought into (the rest of) the world, captured by them. Or is she?
The girl is a lethal one, remember, so she carries out her mission, only she, unbeknownst to her, she hasn’t – Marisa’s still alive (the trailer gives this away, ergo my lack of Spoiler Alert). She escapes, embarking on a get-to-know-yourself kinda journey across Europe, meeting folks, at last, and interacting with them...listening to music for the first time in her life.
She’s also a feral one, and the script has a little bit of fun with these culture-shock moments, and thus the movie slows down just a tad so it’s not all about killing and revenge but about Hanna and the revelations that will illuminate her past and shape the rest of her life.
Hanna walks this fine line nicely, utilizing action sequences wisely. There doesn’t seem to be any willy-nillyness here, and I think I appreciated that the most. That, and Ronan, who pierces the screen with her beautiful, magnetic blue eyes. I left the theater impressed by how she turned a character we’ve seen a lot in many media and made it a fully realized one. Yeah, she's bad, for all intents and purposes, but you root for her. That’s a nice accomplishment always (for an actor and a project).
Ronan holds her own alongside Bana and against Blanchett (who remains a wicked cypher, but an effective one throughout) and – gasp! – made me think she’d make a worthy Buffy Summers should the powers that be insist on rebooting her for the big screen.
My Rating ***1/2
Photo: Focus Features.
Posted by Martin Haro at 9:47 AM