The new animated offering Rio bursts onto an otherwise cheerless spring with vibrant colors, some pretty awesome voice work by Jesse Eisenberg and Anne Hathaway, and a soundtrack rich in boss nova sounds supervised by Sergio Mendes that’s fun but could’ve been funner. 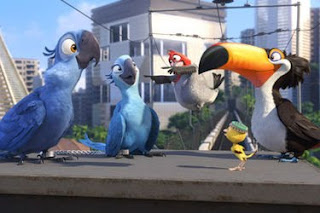 Eisenberg does his neurotic thing as Blu, a macaw-out-of-natural habitat that can’t fly. The poor little guy was poached from Brazil like, seven and a half seconds after hatching, and grew up in Moose Lake, Minn., as the BFF of a bookish girl-later-grown woman named Linda (voiced by Leslie Mann).

Blu and Linda could not be happier together. She adores him, and he adores her and his life in Minnesota.

When a Brazilian scientist (Rodrigo Santoro) comes a-knockin’, though, Blu starts to wonder, fleetingly at first, just who he really is. He begins to question why he doesn’t fly, and if a life lived inside is really what he’s meant for, y’ know, especially after Tulio, the scientist, informs Linda that Blu is the last male of his species and that he would like to take him back to Rio de Janeiro so he can mate.

Oh yeah – Rio’s a booty-call movie. It’s all about a...a birdie call. For the kids to enjoy.

It takes some convincing and a little soul-searching, but Blu and Linda agree, and so off they go to South America to meet Jewel (Hathaway), Blu’s more-free-spirited female counterpart.

Not long after he arrives in though, Blu and Jewel are birdnapped by a group of smugglers. Eventually, they escape, combining her street smarts and his knowledge of the human ways, encountering many a misadventure along the way, for the two are literally chained to each other, as well as new pals, including another tropical bird voiced by George Lopez, that help them in their quest to get to freedom and back to Linda.

Rio has a little fun with all of this, with making us hope Blu can combine the best of both worlds (will he learn how to fly? and under what circumstances? will nature be stronger than nurture?), but, ultimately, it troubles itself with trying to be too much (like a coming-of-age story for Blu...and a two-ifs-by-the-road for the lovebirds...and an actioner – the pair trot around the city escaping a number of foes).

If it had taken a breezier approach I’d say this was one trip worth taking. In some ways it is, but you may not enjoy it all the way. The childrens sooo will, though (especially in obligatory 3-D), and that’s who this one is for, after all.