What I Missed Since Last Month... 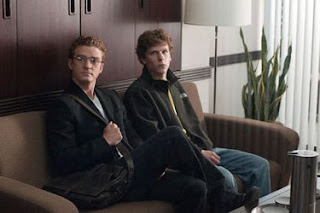 I’ve been busy Art Basel Miami Beach-ing it (or trying to since I’ve gotten kinda sick – urgh), and I, evidently, have missed a few things the last few days.
The nominations for the 53rd Annual Grammy Awards were announced, with a lot of Eminem, Katy Perry, and Lady GaGa thrown into the mix (Madonna’s “Revolver” is up for Best Remixed Recording, but the award would go to David Guetta...).
The National Board of Review named The Social Network the best film of the year. Click here for a look-see at the other films that made the group’s Top 10 list and its other awards.
And Olivia on TV’s Fringe, something amazing happened...but I haven’t watched it yet, so I better get.
Photo: Columbia Pictures (The Social Network).
Posted by Martin Haro at 6:35 AM