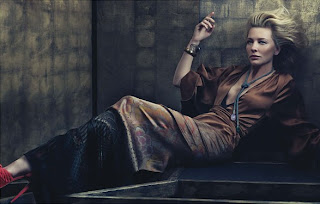 Cate Blanchett is heading the call of Middle-earth once more.
The Aussie will reprise her role as Galadriel, which she first played in the first Lords of the Rings movie nine years ago, in the trilogy’s prequel, The Hobbit, which Peter Jackson is (at last!) ready to direct.
The most interesting part about the news is Blanchett’s ethereal elf character doesn’t actually appear in J.R.R. Tolkien’s Hobbit novel, so it’s safe to presume Jackson is taking some liberties balancing things out in his upcoming, male-heavy two-part project.
The Oscar winner joins a cast of virtual unknowns in the much-anticipated epic, which has yet to confirm the return of Ian McKellen as the wizard Gandalf.
Photo: Fashiontography.blogspot.com.
Posted by Martin Haro at 4:56 PM