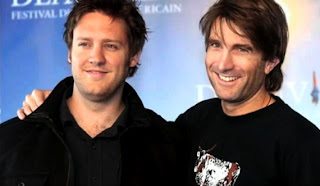 Director Neill Blomkamp (pictured at right, at left) is getting back together with his District 9 star, Sharlto Copley, but not for District 10...not quite yet, at least.
The duo and real-life BFF will work together again in the former’s follow-up, a political, socially conscious ensemble-cast project titled Elysium.
That’s cool and all, but you guys gotta promise the sequel to the Oscar-nominated 2009 apartheid allegory won’t be too long a-comin’, OK?
Alright then.
Photo: JordoMedia.com.
Update: Matt Damon is reportedly in talks to join the project.
This just got even more exciting....
Posted by Martin Haro at 7:28 AM