My Top Stories of the Year 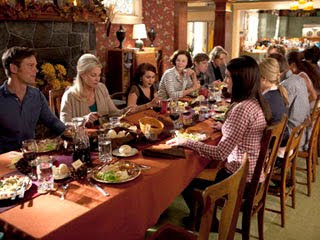 Television and I, we’re BFF.
This season alone I’ve been watching an average of 25 hours a week of TV, which is kinda sick. Especially when you consider I TiVo some of it at home, FauxVo quite a bit of it at a BFF’s (my TiVo can’t handle all my needs), and I OnDemand and watch shows online, too.
It’s a full-time hobby, and so for the first time I want to recognize that which brings me so much please on such a consistent way.
So here’s to what I thought was the best of the tube in 2010
Community: The NBC Thursday night comedy may be ensemble piece, but everyone, from the group’s leader Joel McHale – and his guns – to MVPs like Alison Brie and Danny Pudi to the recurring players, has a chance to school other people in other so-called-funny shows. And how could it not after a season that went totally meta and delivered to insta-classic, clever, hilarious holiday treats (i.e., the Halloween ep, with its school of zombie, and the Christmas one, with its stop-motion brilliance). I hope these folks never graduate.
Friday Night Lights: Season 4 of this TV gem was more of the same. And by that I mean all kinds of amazing, with standout episodes like the one that should have scored Zach Gilford an Emmy nod and season-long arcs that built toward new beginnings for everyone in Dillon, Texas. Plus, Kyle Chandler and Connie Britton continued delivering some of the best performances on TV, period, and making us wish we had people like them in our lives.
Fringe: The Fox sleeper dared to be even more, well...daring, and capable, and astute in the first half of its third season than most shows try to be in their entire run, or than anyone could hope for, and executed it all pretty much flawlessly. Anna Torv excelled at pulling double duty playing the role we’ve come to learn to love her in...and her (say, evil) alternate-universe counterpart, while Joshua Jackson continued showing enormous restraint, and John Noble reminded us, ep after ep, that he must get an Emmy nod this year, unless the Academy wants fans to cover its headquarters in amber.
The Good Wife: Because in its second season the Julianna Margulies vehicle demonstrated it is as layered as an onion. And because of Archie Panaji, whose investigator Kalinda, is one of the most intriguing characters I have ever seen on TV. And, most importantly, because it always leaves me wanting more.
Modern Family: The laughs and the quotables never stop when you’re in the company of these three families.
Nikita: It’s all about the Q Factor with this one, as in Maggie Q. The actress brings an unstoppable amount of sexy to the role of the assassin dead-set on revenge. The show may get shtick-y from time to time, but I’m too afraid of Q’s moves to say anything. Oh. Oops.
Parenthood: The Bravermans rock. End o’ story. Alright, it’s because as heightened as their love and support and care for one another is, it still rings real. Plus, Lauren Graham. Hello!
The Vampire Diaries: The guilty please may be on The CW, but it is by far one of the most satisfying, action- and drama- and dark-humor-packed hours of TV anywhere. Nina Dobrev blossomed this year and kicked butt and took numbers in her dual role as Elena and her deliciously bitching vamp-doppelgänger Katherine. And Ian Somerhalder got even more likeable as Damon, the bad vampire we’re meant to hate but can’t help but love.
The Walking Dead: Six episodes was enough for me to get hooked on zombies. And Andrew Lincoln. I would like next fall to get here, already, please.
10: This spot could have gone to a number of shows, like the still-has-it 30 Rock, or Cougar Town, or Damages. Don’t make me choose.
Photo: NBC.com (Parenthood).
Posted by Martin Haro at 3:13 PM

You need to get out of the house.