I’d been looking forward to James L. Brooks’ How Do You Know, if anything because I’d seen on-set photos that suggested the movie would be cute – and how could it not be with a cast that includes the irresistible Reese Witherspoon, Owen Wilson, the charmer of all trades Paul Rudd, and Jack freakin’ Nicholson. 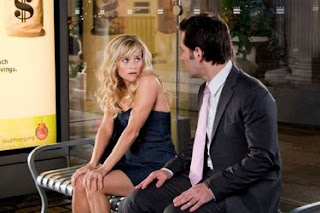 Alas, what can I say...the movie is, surprisingly, not all that.
Witherspoon looks beyond-lovely in it, though, her hair so sunny and wavy and just the right length o’ sexy.
It’s actually a bit puzzling that How Do You Know doesn’t work. It follows a pretty standard rom-com-ish story – girl torn between boys, with a few bigger-picture conflicts tacked on for good measure – but it does so in such a messtastic way. The movie opens and we’re like, thrown into these people’s situations pretty quickly, almost without rhyme or reason.
There’s a disconnect between what the characters say, what we’re led to believe they’re essentially all about and moving toward, and what they seem to be doing on screen.
Take Lisa (Witherspoon), for instance. She’s this fantastic softball player, right, but we never see her playing the sport – she’s been cut from the 2011 Team USA. The presumption would be she’ll be trying to figure out her next step, but she’s instead happy to go through the motions.
Huh?
Alright, I can understand her ambivalence, but because we’re also told and shown that this is a woman who has a laser-sharp focus, who knows how to do battle on and off the field (her bathroom mirror is covered with feel-strong affirmations), it just seems odd that she goes down the road she does.
To see her in the throes of non-passion with Matty (Wilson), a vain big-time baseball player who’s fun and good in bed but completely dysfunctional in a grown-up relationship, it rings so against her nature it’ll make you wonder how she doesn’t realize she belongs with this other guy, George (Rudd), a legally embattled businessman with early onset neurosis facing a jail sentence for the sins of his boss/undeserving father (the underwritten Nicholson).
He’s really quite perfect – except for the federal inquiry that’s the thorn at his side, about which Lisa knows nothing. His outstanding nature is blemished by this unsatisfactorily explained wrongdoing, which has made him doubt himself so he doesn’t think he deserves Lisa. How he doesn’t realize she’s already his, that she just has to get there, immediately and do something to spare us the next 40 minutes of who will she pick? is a plot device that would work had Brooks written a story that captured his idea better.
That’s the central conflict of How Do You Know: how these folks don’t realize where they’ll end up when the audience already knows it...and how the movie’s writer-director didn’t service his actors the way they and we deserved.
My Rating **
Photo: Sony Pictures.
Posted by Martin Haro at 8:29 AM