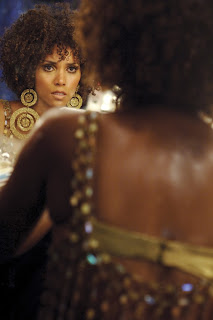 There she goes again, that Halle Berry.
The Oscar-winning actress is making another bid at the gold with her late-in-the-season entry Frankie & Alice, an indie in which she plays a stripper with multiple-personality disorder (her other two personas are a racist white woman and a small child).
From the trailer alone I can tell Berry is definitely a contender thanks to, indeed, another “gutsy,” and, yes, surprising performance.
The film, co-starring Stellan Skarsgård and Phylicia Rashad, opens in very limited release on Dec. 10, I believe.
Photo: DirectPreviews.com.
Posted by Martin Haro at 9:53 AM