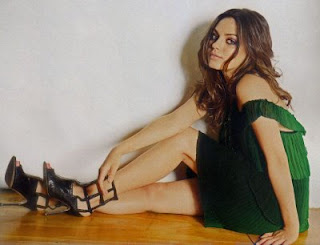 Mila Kunis, who’s gone from stealing scenes on TV’s That ’70s Show to earning major awards buzz (deservedly so) for her supporting turn in Black Swan, is not slowing down her big-screen takeover.
The actress recently wrapped the comedy Friends with Benefits opposite Justin Timberlake and is negotiating a role in Seth MacFarlane’s Ted.
Kunis, who does the voice of Meg on MacFarlane’s Family Guy, would play the girlfriend of a man (quite possibly to be played by Mark Wahlberg) who, as a young boy, wished his teddy bear could come to life. His wish comes true, and hilarity ensues.
Photo: Zimbio.com.
Posted by Martin Haro at 7:06 AM