Of Bond Things Past, Present, and Future 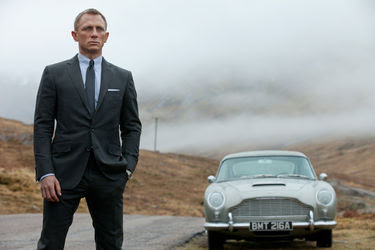 Oh, Skyfall, Skyfall, Skyfall – I thought you’d never get here, but here you are...and there you’ve been, with your winks to classic elements of your enjoyable heritage (check out that pic above again, y’all) and making millions around the world before coming out stateside.

For a while there, it looked as if the latest 007 adventure starring Daniel Craig wouldn’t happen at all. It has been five long years since Quantum of Solace, and in that time, MGM ran into financial woes. If anything or anyone was ever going to serve as an incentive for the studio to get its act together (GTS), that was always gonna be James Bond.

So let's just say he did it, and does it in this new movie, for queen, country...and Hollywood.

I ascribe that savior descriptive to the legendary character (who is seriously looking bettah than evah as he celebrates his 50th anniversary this year, by the way) because – Minor Spoiler Alert! – Bond like, dies in this 23rd chapter of the franchise.

As he says in the movie’s trailer, though, the guy has a special hobby: resurrection.

And, boy, does he come alive in this one – especially after the halfway point of the movie’s 145-minute run – because in this one, the bad guy hits home.

The Sam Mendes-directed movie opens with Bond and an associate named Eve (Naomie Harris, whom you should remember from 28 Days Later and Miami Vice) in hot pursuit of a murderous suspect through the streets, markets, and outskirts of Istanbul.

The pre-credits-featuring-Adele’s-titular-theme-song sequence is fackin’ phenomenal and thrilling, but I won’t go into too much detail here or elsewhere when it comes to plot descriptions because that’s why you go to the movies...and I know you don’t want your fun spoiled now, do ya. Let me just say Bond fails in his mission. A shot is fired. He is believed dead.

Of course, he isn’t.

While he is recuperating nicely and bare-chestedly on some beachy paradise somewhere off the grid, MI6 and, more pressingly, M (Judi Dench) become the target of bloody cyberattacks.

With the integrity of the British spy game compromised – the intel Bond and Eve were tracking is directly tied to these attacks – and M’s steely leadership of the agency in question (enter Ralph Fiennes as a is-he-good-or-is-he-bad? suit), Bond comes back from the dead and reports for duty.

With the help of a new Q (Ben Whishaw, whom I am finding increasingly appealing), our favorite licensed to kill agent tracks down the cyberterrorist behind the mayhem, meeting an alluring creature along the way, natch. She’s the beautiful and vulnerable Severine (Bérénice Lim Marlohe), and she has a word of warning: The man he is looking for embodies fear unlike any Bond has ever met.

He is Silva, a slithery creep that sooo should go down as one of Javier Bardem’s most memorable creations thanks to another signature hair situation (a blond that’s almost white, and a long that’s long enough to be sophisticated in a ponytail...and menacing when it’s undone and seen through flames).

Silva has history and beef with Bond and, in particular with M – or don’t they remember. And Silva is dead-set on not only making M suffer (he makes her watch as he blows up MI6, he threatens the lives of all her spies); he wants to introduce her to her maker.

The guy is fearsome because he gets his evil on by getting under his prey’s skin. He likes to keep his distance (that’s why he’s a cyberterrorist who operates from a remote abandoned island), so he can get in people’s heads...make them feel like sitting ducks.

One of the big questions in Skyfall is: Can he get under Bond’s skin and test his loyalty to M so that he unwittingly becomes a pawn in his plan?

The bigger, more important question of the movie is: Is there still a place in the world for the likes of 007 and his operation?

By the end of the coulda-been-tauter-in-the-middle-there movie, the answer is clear. And the cost of that answer, found in the coldness of the Scottish Highlands, is both sad and reinvigorating.

Photo: Sony Pictures.
Posted by Martin Haro at 9:00 AM