When Love Takes Over

It’s not often that you see a good girl go bad in a rom-com and find yourself rooting for her – Hollywood doesn’t really bring out that shade of grey to dress its movies up in because it needs its heroines to be more defined than that for the genre to quote-unquote work. 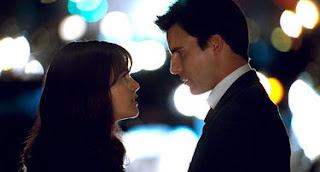 So Something Borrowed is a bit of rarity.
It tells the story of a lovely-looking lawyer (Ginnifer Goodwin), who is love with her BFF’s oh-so-dreamy-looking fiancé (Colin Egglesfield).
In fact, Rachel has been in love with Dex forever, since they went to law school. They met cute in class one day – she charmed him with her OCB, he rescued her a bit when her perfectly lined pens fell to the floor.
The two, flashbacks tell us, liked each other, alright, but they never did anything about it. Like, she was too shy and insecure to think he could love her (she was the mousy type), while he couldn’t or wouldn’t make a move until he knew for sure he could or should.
Rachel and Dex were right there in front of each other for years, but they dropped the ball, and then he met Darcy (Kate Hudson), Rachel’s fun-loving, more obviously attractive friend, and she made her move, because that’s what she does, and got the guy.
Now, on Rachel’s 30th birthday, the up-and-coming lawyer is thriving but still very much single. Leave it to a night out on the town to mess all that up. Yep, after a few drinks – not that many, actually – Rachel and Dex get together. Ergo what it’s called Something Borrowed....
With their feelings now finally out in the open, things get...complicated. Even more so when her good buddy Ethan (John Krasinski) decides to throw his name in the hat and make a move for her affections.
Ah, love squares.... They’re so full of possibility. And drama.
You get what I meant about those shades of grey now, huh.
Here’s the thing, and this is the biggest problem I had with the movie (pacing was a minor one): We live in a world of grey, and we go to the movies to forget about that. The characters in Something Borrowed are all a little too real when they’re not a little too cliché for the sake of the genre (the girls literally bust a move during post-bachelorette party scene), and that, my peeps, may rub some of y’all the wrong way.
Sitting there in a dark movie theater you may recognize a little bit of the longing in Rachel (who clearly, really struggles with what’s going on), or the carelessness in Darcy (who’s unabashedly self-involved), or the indecisiveness in Dex, and...cringe a bit for a hot sec only to then think that’s not what you paid for – you paid to escape.
The cast acquits itself nicely of any of the script’s many silly and gun-shy trappings because, well...just look at who we’re dealing with here.
The bottom line is the movie, an adaptation of the eponymous Emily Giffin novel, will be everything you want it to be and so much more if you know going in on that it is out to debunk certain conventions while holding on tightly to many others more worthy of debunking.
If you can remember and acknowledge that right away, you’ll totally enjoy it and look forward to the planned sequel, which is all but confidently promised after the credits have rolled.
My Rating ***
Photo: Warner Bros.
Posted by Martin Haro at 9:18 AM