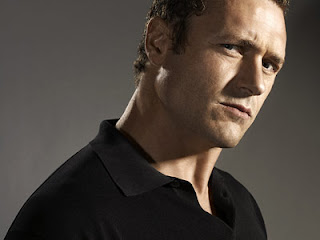 Jason O’Mara, the star of the late TV drama Life on Mars, is going where Kyle Chandler wouldn’t...to Terra Nova.
The Irish hottie will star in Fox’s upcoming show about humans from the year 2149, who are forced to find a way to save the human race and discover a rip in the time-space continuum that can send them back to pre-human Earth.
The powers that be behind the buzzed-about project are quite cult-y, so a following is all but guaranteed.
Terra Nova come from exec producers Brannon Braga (24, Star Trek: Enterprise), David Fury (24, Angel, Lost), and Steven Spielberg.
The show will start shooting this summer in Australia, and bow its (initial) 13-episode run next winter.
I think O’Mara is a rather nice, solid choice. Handsome, too.
Photo: TimeInc.net.
Posted by Martin Haro at 3:18 AM