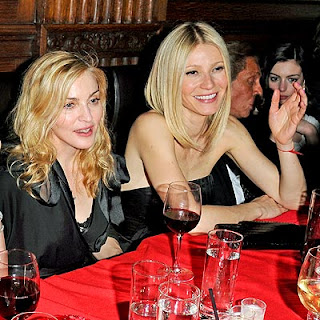 Longtime BFF Madonna and Gwyneth Paltrow reportedly are in a feud.

“They don’t speak,” a source said. “I can’t tell you exactly why they had the falling out, but Gwyneth can be jealous and competitive.”

Didn’t they supposedly have a tiff around this time last year…and then showed up to a party for Valentino in New York and hung out all night?

Anyway, supposedly, the row has deep roots and whatnot, and M’s divorce from Guy Ritchie is one of the reasons the two have fewer things in commong. G.P. remains a married lady, to Coldplay’s Chris Martin.

I really hope the news is bogus, you know...because I have so much riding on this friendship. Nah, I just like the idea of these two as friends.
Photo: People.com.
Update: A rep for Gwyneth Paltrow has debunked the rumor, saying the Oscar winner and M are very much still friends.
Ditto a Queen of Pop mouthpiece, who called the story “BS.”
Posted by Martin Haro at 3:17 PM