Ever wonder how (surprisingly) unfunny a movie would be if, say, five of the funniest guys in Hollywood got together to pal around on screen for 102 minutes? 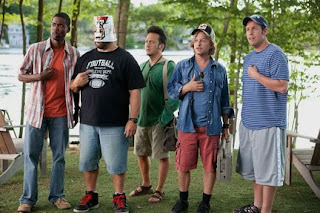 Well then, look no further than Grown Ups.
This is an OK, I guess, comedy about five childhood friends who reunite one Fourth of July weekend, more than 30 years after they won a championship basketball game way back when, to mourn their beloved coach by a lakeside cabin built on the memories of those easier years of yore.
Adam Sandler leads the pack as the most successful one of ’em all, a big-shot Hollywood agent with a hot, high-maintenance, fashion-designer wife (Salma Hayek). He yearns for his iKids to experience the innocence of their childhood the way he did once, before people started communicating with one another in 140 characters or less.
Kevin James plays the suburban, loser-ish, married-to-a-hottie (Maria Bello)-who-still-breast-feeds-their-“48-month-old” one.
Chris Rock – stunted by his inability to curse in the same way he relishes during his live gigs – takes on the role of the Maya Rudolph’s desperate househusband.
David Spade plays the (single) perennial party boy, while Rob Schneider is the...eccentric one, a toupeed vegan married to a much older lady.
Coming together, this brood of BFF discovers why growing older doesn’t necessarily mean growing up. None of these guys is particularly well-written, not fully, you know what I mean, but you should be able to get what the movie’s lesson is: The ties that bind us are stronger than anything that divides us, and that includes merciless ribbing.
Family is what matters most and these five men are It to one another. No one drives this home more than Sandler, who as co-writer penned himself a nice role that embodies this to the point of, Alright, I get it, you’re re-inventing yourself a little bit here...but not too much that we won’t recognize you.
If only he’d written a funnier movie, not just a funny-enough one.
My Rating **
Photo: MLive.com.
Posted by Martin Haro at 7:59 PM