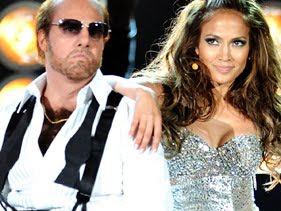 Coming on the heels of his outing as Les Grossman, the raunchy film producer he first played in 2008’s Tropic Thunder, at the MTV Movie Awards last weekend, Tom Cruise will reprise the role for a movie based on the character.
Tropic Thunder co-star and director Ben Stiller will co-write the screenplay.
It was only like, four days ago that Cruise adopted the Les Grossman persona once again for a sketch during the MTV awards show, as well as a live performance with Jennifer Lopez. Paramount, the studio behind the project, said, ever so cheekily, that it has “secured the life rights to Grossman,” who “recently mentored talents such as Robert Pattinson and Taylor Lautner.”
Stiller, for his part, said, “Les Grossman’s life story is an inspiring tale of the human class struggle to achieve greatness against all odds. He has assured me he plans to quote ‘F---ing kill the s--- out of this movie and make Citizen f**king Kane look like a piece of crap home movie by the time we are done.’ I am honored to be working with him.”
This is going to be funny, I can tell.
Photo: MTV.com.
Posted by Martin Haro at 4:04 AM