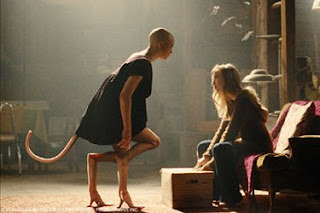 A good thing since it’s not necessarily edge-of-your-seat exciting through and through as much as it is often distractingly unbelievable in an oh-no-they-di’n’t sort of way. So thanks for the chuckles. But also a bad thing since, well...it’s supposed to be...uh...scary.

Adrien Brody – Academy Award winner Adrien Brody, lest your forget – plays Clive Nicoli, a scientist so laid-back it made me question his aptitude for the genetic experiments he conducts.

He works for a pharmaceutical giant at this research lab called NERD (which, cleverly, stands for Nucleic Exchange Research and Development) with his longtime girlfriend Elsa Kast (Sarah Polley), who’s obviously smart, yet aggroyingly stoopid.

Together, this couple of brilliant, hipsteresque people of science are on the cutting edge of DNA splicing – on the brink of something truly revolutionary, of a discovery that will write their ticket. Clive is so laissez-his-gf-faire, though, you’d think they’re working on simple math, not something that could change the world for the horrendous.
Anyway, already one of their experiments has proven a success. By splicing together several animals, Clive and Elsa have created a couple of slug-like life forms that may hold many riches for their pharmacompany employer. That, in turn, means they have to focus completely on the task at hand, but scientific curiosity cannot be helped, and soon Elsa is deciding, for the both of them, that they should see if they can splice anything with human DNA.
Just for funsies.
Working off the grid, they play god, momentarily considering their moral or professional obligations, but ultimately manufacturing a one-of-a-kind creature that is greater than the sum of its parts: a rapidly developing animal/human hybrid that may be a step up on the evolutionary ladder.
Or their undoing.
The female creature they name Dren (think about it) awakens some odd maternal feelings in Elsa, evokes something far-from-paternal in Clive – the movie features a controversial sex scene, which got plenty of laughs at the screening I attended – and poses a threat to them all.
The movie starts out a taut something, but ends up a borderline ludicrous something else. It switches genres on the audience a little bit in an unseemless way that left me confused. I appreciated that it didn’t turn into a kill-one-a-time joint, but, like Dren, it just felt overstuffed, y’ know.