More Than She Bargained For 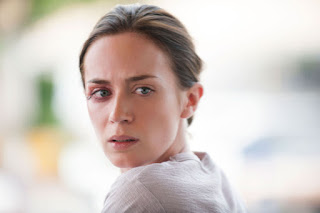 Emily Blunt is going to get a reality check this fall.

The actress is headlining Sicario, director Denis Villeneuve’s follow-ups to Enemy, playing an idealistic FBI agent who joins an elite task force stationed on the fairly lawless U.S.-Mexico border, where she and her team battle against drug lords, an experience that makes her question everything she believes in as her morals are pushed to their edge. Because she and her team are forced to team up with a mysterious man with questionable intentions portrayed by Academy Award winner Benicio Del Toro.

The film made a splash at the Cannes Film Festival earlier this summer, and it is coming out next month, on Sept. 18 (check out its latest trailer now), and it stars Emily friggin’ Blunt, so, yeah, I think I just typed everything I needed to type.

Photo: Fandango.com.
Posted by Martin Haro at 6:03 AM