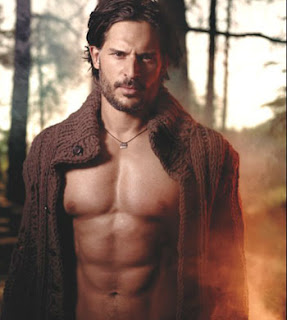 And by that I mean what I want.

Word is Joe Manganiello is thisclose to signing on the dotted line to play a (hot) part in the Steven Soderbergh-directed movie based on Channing Tatum’s pre-acting experience as a male stripper.

Alright, so the competition is now closed: With Tatum, Alex Pettyfer, Matthew McConaughey, and Matt Bomer on board, this will be the studliest movie of 2012.

Oh, and get this: The True Blood hunk would play a character named Big Dick Richie.

We better get to see if he lives up to the moniker, huh.
Photo: SocialiteLife.com.

A source close to the Magic Mike production has said Steven Soderbergh more than likely will feature some full-frontal nudity in the movie.

I wonder who will doing the showing off....
Posted by Martin Haro at 4:56 AM