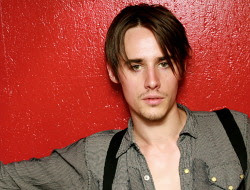 Broadway’s Spider-Man: Turn Off the Dark may not have made Reeve Carney the household name everyone thought it would (you know, since the show was such a messtastic proposition), but the up-and-comer’s getting another shot at getting the right kind of notices.

Thanks to his combination of musical prodigy, impish charm, innate intelligence, and sensitivity, the actor is set to play Jeff Buckley in an untitled second project about the legendary singer-songwriter.
Unlike the Penn Badgley-starring Greetings from Tim Buckley, though, this Jake Scott-directed movie will feature Buckley’s music and personal archives, as well as Leonard Cohen’s permission to use “Hallelujah.”
Photo: NewYorkTheatreLeague.com.
Posted by Martin Haro at 10:15 AM