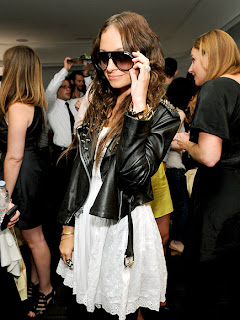 Uh oh, Nicole Richie’s up to her old guesting-on-Chuck tricks....
The former Hollywood hellcat pretty much rocked it out when she appeared on the show a couple of years ago, and now comes word that girlfriend will reprise her role as Sarah’s (Yvonne Strahovski) high school nemesis next season.
Meow!
Richie will resurface in October when a prison transfer goes awry and her character ends up being stowed away at Chuck (Zachary Levi) & Co.’s underground CIA base. And since she’s such a bitchin’ troublemaker, she will see that Chuck and Sarah’s deepening relationship is hitting some bumps and will use that rift to her advantage.
What...a beeyotch.
Photo: People.com.
Posted by Martin Haro at 3:47 AM