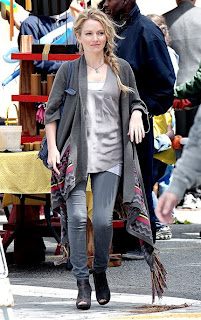 Becki Newton and Chris Diamantopoulos are expecting their first baby.
No, that’s not the part that sucks – I think it’s swell a most-telegenic baby this way comes.
Newton’s pregnancy, though, is affecting my fall TV watching: NBC has bumped its new comedy Love Bites to midseason, in part because of the happy news.
Alright, so Love Bites is a-comin’, eventually, but wait: there’s also some behind-the-scenes tinkering going on.
Show mastermind Cindy Chupack (Sex and the City) has stepped down from her role as showrunner.
“Launching an anthology series, which breaks the form in so many ways, is a huge undertaking, and I strongly feel that I can be most helpful not showrunning, but writing,” she said. “It just became clear that for several reasons, some of them personal, this change (and a little more time) is what we need to launch this show properly.”
Time, though, has not been on the side of Love Bites co-star Jordana Spiro, who is leaving the show because of her commitment to TBS’ My Boys.
Oh, well...as long as Newton (pictured here, on set) has a healthy baby and the show comes to us as its best version all is well.
Photo: Zimbio.com.
Posted by Martin Haro at 5:26 AM