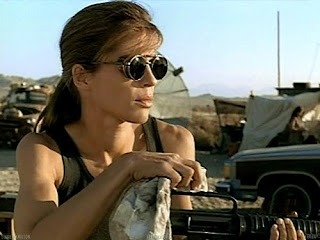 The show’s powers that be had been looking for the perfect lady to play the part, and over the weekend, at Comic-Con (natch), they announced they have settled on the erstwhile Sarah freakin’ Connor.

Hamilton will make her first appearance as Mary Bartowski on the Sept. 20 fourth-season premiere.
“Obviously, her body of work was important, but also knowing what this part was and the intensity that we were going to need, Linda was a natural fit,” said executive producer Josh Schwartz. “She’ll be [kicking ass] right out of the gate.”

Chuck’s upcoming season promises to deal with the mystery surrounding our hero’s mother, and the first episode back promises shocking. “By the end of the episode we are going to turn everything on its head with regard to who she is,” Schwartz’s fellow EP Chris Fedak said.

Here’s to hoping the actress brings her guns, if you know what I mean….