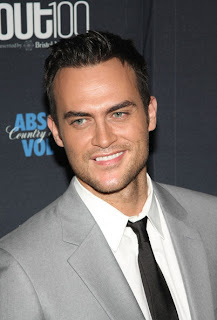 The brain trust behind South Park, Trey Parker and Matt Stone, will take on the lives and loves of Mormons with their latest project, a Broadway musical starring cutie patootie Cheyenne Jackson.

Parker and Stone first got their lyrical feet wet with an Oscar-nominated song from 1999’s South Park: Bigger, Longer & Uncut, and have teamed up with Robert Lopez, the co-writer of Avenue Q to write the script for Mormon Musical.

“It’s hilarious – very acerbic and biting,” Jackson told The New York Post’s Pop Wrap at the Out 100 party last week. “It offends everybody but does what South Park does best, which is by the end it comes around and has something great to say.”

The Xanadu stud will play the show’s main missionary, “Elder something.”

Photo: Zimbio.com.
Update: Hey, Cheyenne. Call Kathy Griffin and ask her for a good lesson on Talking Behind People’s Backs Like God Intended pronto so this doesn’t happen again.
Posted by Martin Haro at 4:55 AM

Stupid. Would be nice if people started realizing what is wrong with themselves instead of pointing at everyone else. Sign of major insecurity and self-loathing.

Are you suggesting there's something wrong with Mormons? It's called Freedom of Speech. Not to mention the material is RIPE for it.

Nope. I was suggesting that those who criticize Mormons should know that their own right to speech is the same as the Mormons'.

I find it funny people who go anonymous on sites.