It’s a sad truth that any time most people see Ashton Kutcher’s name on a movie’s poster, especially something rom-com-looking, their reaction isn’t necessarily, say, favorable...but add the unlikely presence of Natalie Portman to he mix, and, well...folks get intrigued. 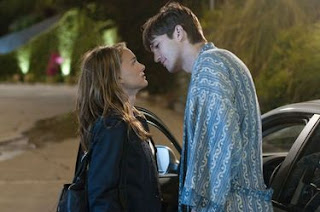 A good thing for Ivan Reitman’s latest, No Strings Attached, a pleasant surprise of a movie that combines some raunch with genuine laughs and plenty of modern-day heart.
Portman and Kutcher play longtime friends – these sort of satellite pals who like, come into each other’s orbit every few years, you know, to remind themselves of a simpler time.
In fact, when we first meet them, 15 years ago, they’re at summer camp. Color Me Badd’s “I Wanna Sex You Up” is playing (of course it is), and trust me when I tell you you’re gonna wanna hang on to their every word and not eat your movie snacks during their exchange. It’s really quite telling of who they are and will become, what kind of people, I mean (the informational download is casual but significant) – and the kicker is hi-freakin’-larious.
Immediately, No Strings Attached proves that it isn’t just another rom-com (in another blast from the past, she plays a sorta trick on him that’s played for laughs but says so much about the ease with which they relate). I mean, you have Portman, a leading contender in this year’s Oscar race for the prestige-y Black Swan, shooting the breeze and talking the way her contemporaries do, and you have Kutcher, who’s made a career out just that. It’s a good combo.
She plays Emma, this very busy resident at a Los Angeles hospital, while he’s Adam, a low-on-the-totem-pole player at high-school-set musical TV show (he has writing ambitions, but he wants to make it on his own, without the help of his legendary, catchphrase-y dad, played by Kevin Kline, who’s this terrible hambone).
Emma and Adam have once again run into each other out in the vastness of L.A,. and right away you can just tell. They don’t make any plans, though, but eventually, they start to see each other. As “sex friends” who have lots and lots of sex.
They...well, she wants to keep the commitments to a minimum – for she’s got stuff going on, so it’s best not to let things get complicated. Whaddya know, though, in a reversal of roles, he is the one who would rather see what’s up.
Theirs is an easy rapport (the same goes for Portman and Kutcher – she totally elevated his game in this one), and while it’s perfectly obvious there’s only one way for their story to end, it is really quite a lot of fun to see them sleep/laugh/make mixed tapes (him, for her period)/show up at the door drunk (she, gamely spewing one of the funniest lines I’ve heard a girl say to get a guy in a movie)/fight/attempt proper dates/struggle their way there.
Sure, alright, after the sexy novelty of the are-we-really-doing-this? realization, the...ahem...action slows down a bit, but you it’s necessary for these two characters (and the movie) to not get stuck in one position.
No Strings Attached, to which Portman was attracted because it was not offensive and even ended up producing, breaks the mold of what we’ve come to expect from the genre smartly. It is, honestly, one of the best Kutcher has made, and a great way for the actress to leave her mark in territory previously commanded by a number of America’s Sweethearts.
This movie won’t get either star an invite to the Academy Awards (she’s set, anyway), but the MTV Movie Awards should show it some love – as should you.
My Rating ***