It’s a Christmas miracle: I Love You Phillip Morris is out in theaters at last. 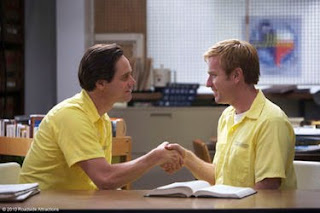 The movie, a black comedy from the writers of Bad Santa, had been in release-date limbo for quite some time (more than a year, actually), and not necessarily because of its so-called controversially gay subject matter – Jim Carrey and Ewan McGregor play lovers, and get pretty graphic with it – but because of funding troubles (the powers that be behind the project ran out of money for a proper stateside release but managed foreign showings).
In any case, the movie proves that it was well worth the wait and resisting the temptation to watch it in pieces online.
As a man whose identity...heck, whose life literally crashes into him, Carrey’s pretty spectacular and (his go-for-broke comic persona adeptly juxtaposed with dramatic layers), you’d think, worthy of some awards buzz. Alas, it seems the delay in getting I Love You Phillip Morris to screens did take a toll, and that would have to be its chances at any gold this season. Oh, well...he knows he did good, and now we all can, too.
Carrey plays this guy named Steven Russell. He’s a family man, an organ player at his church, and a freaking law enforcement officer who, after a car crash (coming home from a secret thrist with – gasp! – another man) becomes this liberated (wait until you hear his coming-out speech), high-living gay man and all-around white-collar scoundrel.
The real Russell, btw, is currently serving a somewhat-harsh-considering 144-year sentence in a maximum-security facility in Texas. That’s because not only did he run many a credit-card scam, he also, during one of his more ambitious schemes, became CFO for this big company, right, borrowing money from its accounts to invest it and pay himself big commissions. Not to mention, he had this too-unbelievable-to-be-true-but-nevertheless-true penchant for breaking out of prison, embarrassing officials along the way and more than once.
Anyway, as it plays in I Love You Phillip Morris, Steve isn’t a bad guy. He’s a cheat and a liar, and the title character (McGregor, never more mild or more charmingly vulnerable) will grow to wish he’d never laid eyes on him, but Steve truly believes everything he does he does for love.
Up until the moment he meets Phillip, Steve has been happy to discover himself. After leaving his God-worshipping wife Debbie (Leslie Mann, about whom I can never gush enough), he moves to South Beach, shacking up with a fetching Latin lover (Rodrigo Santoro), trying his hand at a respectable job but ultimately realizing that to live the gay lifestyle he has to result to frauds. Being gay, he says, ain’t cheap.
For his crimes he lands in prison, where he sees Phillip – who’s in the clink for a petty offense. He pursues him immediately...and, proving that old habits die hard, he feeds him a lie right away, too.
In any case, the attraction is a two-way street, and, after courting/writing to each other for a bit, Steve works his magic so they can cell together. It’s sweet. No, really, it is, and also funny (the movie is at its most outrageous during its first half, switching gears ever so slightly later on to show us the cost of Steve’s choices).
When one of his dirty tricks backfires and they are torn asunder, Steve promises to find a way to get back to Phillip, and he does. He springs himself from the big house, and he does the same for his lover. It’s come what may for this guy.
But – and there’s always a but with guys like Steve – he cannot keep away from trouble. He makes a nice life for himself and Phillip, but it’s one built on a throne of lies. Eventually, it all catches up to him, as it would, and he pays the ultimate prices by losing it all, including the love of his life.
Was it worth it? The answer, the movie tells us is really irrelevant. Steve is damaged goods, and no matter how much he tries, he’ll never be any more than he is. To know him is to love him. But that doesn’t mean neither Phillip nor us have to like him.
We can enjoy him and his story, though, which is more than likely what you’ll do. And that’s a good thing because this movie offers plenty of reasons to. More than anything, it depicts an honest love story between two men that is raw and honest and complicated just like it would be.
It’s a rare sight, but it’s a welcome one.
My Rating ***1/2
Photo: Roadside Attractions.
Posted by Martin Haro at 11:47 PM