Director Darren Aronofsky has a knack for presence, for intrigue, for drama, and his latest, the psychological thriller Black Swan, sure brings it all in precise spades-y ways. 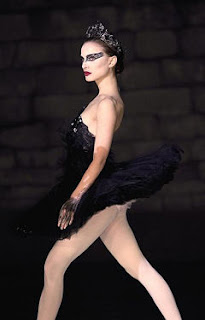 To echo the praise that has been lavished upon the film is to gush about its star, Natalie Portman, who embodies the aforementioned three elements beautifully. She adds layers of vulnerability and fierceness when her role as a featured New York City Ballet dancer on the verge of a mental breakdown calls for them during some of the moodiest, most intense 143 minutes committed to the big screen this fall. She is a mesmerize.
Portman’s Nina is this not-a-girl-doesn’t-yet-knows-she’s-a-woman-to-be-reckon-with-type of individual.
Her breed of ballerina is most controlled. Of everyone in the company, she’s always striving for a perfection that proves elusive to her even when it’s so close and evident to all she can almost touch it but not reach it. The competition she faces is stiff: She has to live up to her mother’s (Barbara Hershey) broken dreams, beware of the other girls, and fulfill her own ambition.
She can’t let go, though...give into her impulses – she speaks in what sounds like a whisper, if not a whimper for most of the film, seldom allowing herself to let the beast within loose – for she doesn’t know what could happen if she did.
When her director, Thomas (Vincent Cassell, in a slithery turn that I’m surprised hasn’t garnered him more attention this awards season), dangles the coveted role of the Swan Queen in his season-opening production of “Swan Lake” in front of her (after casting aside his former prima ballerina, the bombastic Beth played by Winona Ryder), Nina is both excited and afraid. She – and Thomas – knows that she can dance the heck out of the White Swan, but the most seductive Black Swan is less of a sure bet. She has to attack the role, as he puts it, but she struggles.
Thomas doubts Nina has the fire the role requires, that his would-be star can open up and blossom in time for opening night. The arrival of Lily (Mila Kunis, in a breakthrough showing), a shiny, more effortlessly confident new dancer from the West Coast only compounds Nina’s worries. Life begins to imitate the art (Lily mostly dons darker hues, while Nina is often clad in lighter ones).
Little by little, Lily catches people’s attention, threatening Nina’s standing and eventually becoming her understudy. Is she pulling an Eve Carrington? Is Lily, by freeing Nina’s innermost desires, playing her and setting her up for a fall...or is Nina imagining it all under the pressure of her most high-profile role yet?
Black Swan, in many ways, parallels the story of “Swan Lake,” and raises the question of how far would one go for their art.
The film delves into this noir fantasy in keys moments, blurring the lines between what is and what isn’t. It is a technique that Aronofsky mastered in previous films (like Requiem for a Dream), one that he puts to good use here. Without the committed performances of Portman & Co., though, this very easily could have descended into shtick or, worse, camp.
A character study of obsession, Black Swan, however, soars as an unlikely meditation on the cost of success.
My Rating ****
Photo: Fox Searchlight Pictures.
Posted by Martin Haro at 12:48 PM