He Can Speak Clearly Now

Of course The King’s Speech is a frontrunner this awards season – the film has all the makings of a masterful piece of cinema. 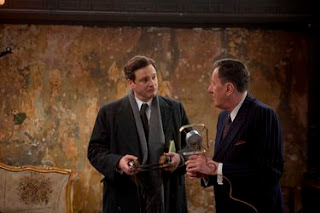 The cast is led by Colin Firth (Oscar-nominated last year for his turn in A Single Man), who’s having one of those...longer moments, if you will, during which an actor is in the good graces of both the public and the critics
Firth plays England’s Prince Albert, the man who would become King George VI, albeit much to his royal chagrin.
Known as “Bertie” to those closest and dearest, which include his devoted wife Elizabeth (Helena Bonham Carter, stealing scenes as the woman who would become the beloved Queen Mother), the prince was a commanding presence, but also very much done in by a debilitating stammer.
He was thus quite happy to stay in the shadow of his father, George V (Michael Gambon), who, as it happens in this kind of story, was monarch first and father second.
The king did recognize his son Albert’s considerable strengths, chief among among them his better suitability to succeed, but that job was always to be his eldest’s, Edward VIII (Guy Pearce), a man more concerned with affairs of the heart than with matters of state.
Bertie, The King’s Speech suggests, always knew he would eventually would have to step and clean up any mess Edward made of the English mornarchy, and that is, perhaps, part of the reason for his speech impediment, which gave him great cause for concern...for pause.
But I’m getting ahead of myself and our story.
When we first meet Albert, he’s once again doing one of his least favorite things to do: delivering an address in public. He’s not having an easy go at it. As much as he wants to, he cannot deliver that which is expected of him, and Firth – with a quivering, yet firm upper lip that, by golly, says plenty even when he doesn’t – is rather heartbreaking as the extraordinary gentle man caught in one of the most ordinary of circumstances of all: the struggle to communicate.
Defeated (the guy has seen everyone he could have seen for his problem), Albert is resigned. He cannot try any more methods. This is who he is, and he’s both relieved by that and troubled. He mustn’t fear anything any longer (that he’ll be called to task), but he shan’t forget he might.
It is Elizabeth – ever warm, ever doting, ever confident in her husband Elizabeth – who seeks out someone else to help cure Albert. She finds that person in Lionel Logue (Geoffrey Rush, tremendous as ever), an Australian actor and speech therapist who is more (and less) than he seems, and the man who helps Bertie, in the most unexpected, unorthodox manner, overcome his stammer and, many years after they first met somewhat reluctant, deliver the faithful speech that lends the film part of its meaning (that would be George VI’s declaration of war on Germany).
The friendship that develops between Bertie and Logue is most extraordinary and, really, one of The King’s Speech’s most enjoyable parts of its oft-didactic, thoroughly enjoyable running time. Firth is extraordinary, and I gotta say I’ve hardly ever enjoyed Rush more, not to mention Bonham Carter, who simply should star in a young-Queen Mother biopic ASAP.
The film may be fairly standard (director Tom Hooper is a vet of TV miniseries – he most recently delivered HBO’s John Adams), but it is elevated by the three spectacular performances that are the thing awards buzz is made of, and deservedly so, no less.
My Rating ***
Photo: The Weinstein Company.
Posted by Martin Haro at 8:59 PM